Two Muslim politicians from Nigeria’s ruling All Progressives Congress (APC) party will contest the 2023 general elections on a joint presidential ticket, a decision that has prompted some criticism. In response, a video of a Christian priest relating a kind act by a Muslim cleric has been published on Facebook with a claim that the sermon was effectively an endorsement of the APC’s candidates. However, the original footage makes no mention of politics or the elections and was filmed before the APC’s presidential candidates were chosen.

“Priest weighs in on the Muslim/Muslim ticket, and narrates how a pastor refused to accommodate him when he was stranded but an Islamic cleric did. Rise above false identity and face reality,” reads the post published on July 12, 2022. The short clip of a priest delivering a sermon has been viewed more than 5,500 times. 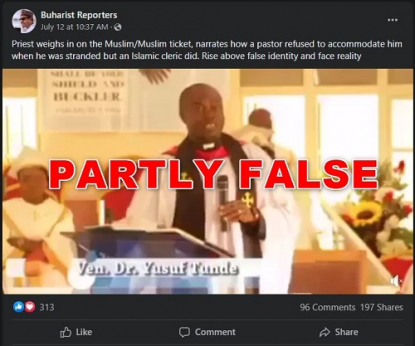 The narrator in the clip talks about how he was given shelter once by a Muslim man after he found himself “stranded” somewhere in northern Nigeria after being turned away by a local Christian church.

Unlike the claims on Facebook, the sermon does not deal with Nigerian politics or the ruling party’s decision to put forward two Muslim candidates – Bola Ahmed Tinubu and Kashim Shettima –for president and vice president next year.

The clip published on Facebook was extracted from one of the videos published on June 11, 2022, a month before Tinubu named Shettima as his running mate.

Contacted by AFP Fact Check, Tunde said the footage was a recorded sermon delivered at his church in Rayfield, Jos, on April 24, 2022, more than six weeks before Tinubu was nominated as APC’s presidential candidate.

He did not mention Nigeria’s ruling APC in the 40-minute long video which centred on the “power of the resurrection”. Tunde said he does not support “any candidate’s political ambition”. 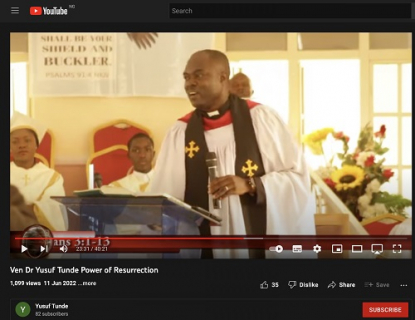 A screenshot of the original video posted to YouTube, taken on July 13, 2022.

“I did not preach in respect to the Muslims-Muslims ticket,” Tunde told AFP Fact Check. “I shared my experience on the lack of love among we brethren.”

The clip posted on Facebook can be found 23’05” into the original video.

As reported by AFP, APC’s decision to nominate a Muslim running mate has become a hot-button topic in Nigeria, with critics saying the decision is a disregard for Christians.