Voters in Osun, a key state in Nigeria's southwest, will choose their governor for a four-year term on July 16, 2022. This marks the last major election before the country goes to the polls next February to elect a new president. Ahead of Saturday's ballot, several debates have been held among the leading candidates, including the two front runners — incumbent Adegboyega Oyetola of the ruling All Progressives Congress (APC) and Ademola Adeleke of the People’s Democratic Party (PDP). AFP Fact Check has spot-checked claims made by the various contenders and found some to be false.

Osun is seen as a crucial battleground for next year's election when Nigerians elect a successor to President Muhammadu Buhari along with state and federal MPs and governors.

Incumbent Oyetola defeated PDP's Adeleke during the last ballot in 2018.

Other candidates running this year include Akin Ogunbiyi of the Accord Party, Yusuf Lasun of the Labour Party (LP) and Goke Omigbodun of the Social Democratic Party (SDP).

In a debate held on July 6, 2022, Accord Party’s Ogunbiyi alleged the state government “has five [mining] licences” which are operated in partnership with “the Chinese”.

SDP’s Omigbodun then claimed during a discussion about health services that “47% of people in Osun state live below the poverty line, the worst in the federation”.

And, at an earlier debate organised by BBC Yoruba, Lasun of the Labour Party said he had passed the 30, 000-naira minimum wage bill which “the Senate only concurred”.

But all these claims are either false or misleading.

“The crisis that we have in the mining sector is a creation of the government. This government has five licences. Instead of partnering with internationally recognised mining companies, they chose to partner with [the] Chinese,” Ogunbiyi claimed during the debate hosted by Arise TV on July 6.

The Nigerian Mineral and Mining Act of 2007 put the ownership and control of mineral resources found in commercial quantities in the hands of the federal government, which can, in turn, issue licences to interested parties.

Information provided by Nigeria’s Ministry of Mines and Steel Development on valid mining titles in the country shows that while Osun indeed has five licences, only one is affiliated to the state government. 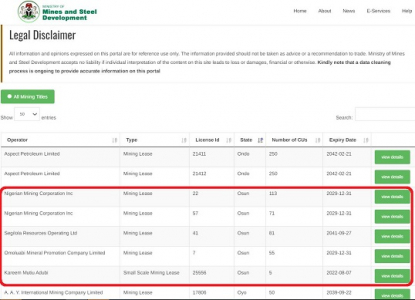 Two of the licences belong to the Nigerian Mining Corporation and another two are owned by private entities, including Nigerian-Canadian Segilola Resources Operating Limited. The remaining licence is operated by Omoluabi Mineral Promotion Company Limited under a public-private partnership with the Osun state government.

Illegal mining of solid minerals without approval, or with expired and fabricated licences, is a big problem in Osun, where security operatives have repeatedly arrested several Chinese nationals and locals.

However, the illegal miners are not legitimate Chinese licence holders.

“If you look at the mining sector… we have 26 commercially viable solid minerals in Osun,” Ogunbiyi said. “We have not been able to have any investment strategy, any cohesive strategy to ensure that we take maximum advantage of this.”

Although Osun has an abundance of natural resources, there is no evidence to show it is home to such large commercial quantities of solid minerals.

The latest solid minerals investment brochure published by the mines and steel ministry in 2017 revealed there are only nine “mineral resources possibly in commercial quantities”. The ministry listed the solid minerals as clay, granite, talc, dolomite, feldspar, quartz, limestone, mica, and gold.

The election debates also focused on the health sector. Candidates for instance were asked about their plans to address health challenges in the state, including rising cases of infant mortality.

Omigbodun explored the link between health problems and poverty, claiming that “right now in Osun state, about 47 percent of the people live below the poverty line, which is one of the worst in the federation”.

However, data provided by Nigeria’s National Bureau of Statistics (NBS) shows that Osun had a poverty rate of 8.52 percent as of 2019 when the last Nigerian Living Standards Survey (NLSS) was conducted by the statistics office. AFP Fact Check found that Osun’s poverty rate was the lowest in the country, after Delta and Lagos.

NLSS is the official survey providing the basis for measuring poverty and living standards in Nigeria, according to the NBS. It puts the national poverty rate at 40.09 percent against Omigbodun’s 42.6 percent claim.

“Poverty is measured using consumption expenditures rather than income in Nigeria — similar to the approach taken by many other countries globally,” reads the survey’s report. It further defines the poor as those whose consumption value is below 137,430 naira ($330) a year.

Lasun, a former deputy speaker of Nigeria’s House of Representatives, said at the debate hosted by BBC Yoruba on June 30 that he “passed” the minimum wage bill.

This is misleading. Lasun chaired a public hearing committee on the bill. His committee recommended to the House of Representatives to pass the bill.

However, it was the speaker Yakubu Dogara who led the House plenary during which lawmakers passed the bill on January 29, 2019. The Nigerian Senate approved the bill less than two months later.