Social media posts claim CTV News reported Ottawa police seized ice cream trucks as part of the response to protests on Canada Day, sharing an image of the purported article as proof. But officials from Canada's capital said no ice cream trucks were seized, and the news organization confirmed it did not publish the story.

"This is not a headline from The Onion. I saw this icecream truck at Strathcone Park and the police moving in. I left before it was seized," says a July 4, 2022 Facebook post referencing a well-known satire publication in the US.

The post includes an image of what appears to be a CTV News article with the headline: "Ottawa Police seize 4 ice cream trucks, 7 bouncy castles, and 12 pounds of chalk on Canada Day." 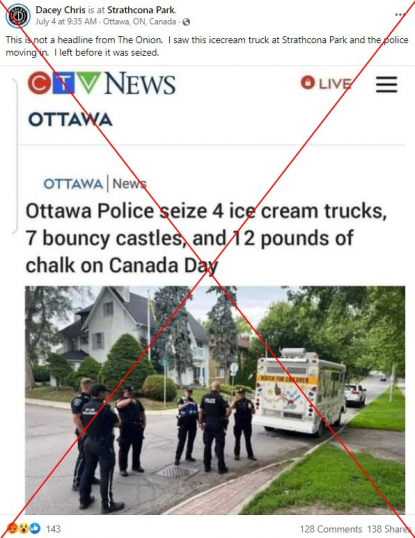 The image circulated after Ottawa police called in reinforcements to manage events planned for Canada Day. Leaders of the self-proclaimed "Freedom Convoy" returned to the capital to demonstrate against Covid-19 vaccine mandates following protests that occupied downtown for several weeks earlier this year.

But CTV News did not publish the article pictured in the social media posts.

Rob Duffy, CTV News manager of communications at parent company Bell Media, told AFP on July 5: "I can confirm that this post is not authentic to CTV News."

A Facebook search indicates the image likely stems from a July 3 post by the account "Live From The Shed," which says it is dedicated to "sharing the stories of truckers, volunteers, streamers and other heroes from The Freedom Convoy To Ottawa." The same account posted the image on Instagram.

"Thank you for keeping us all safe! #canadaday2022 #Ottawa (barely parody)," says the caption on both posts. 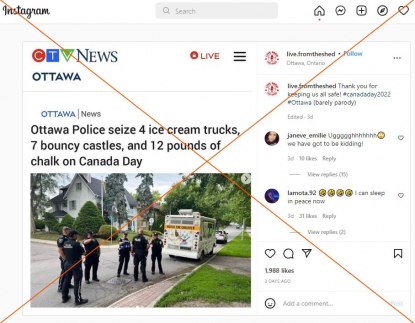 However, the image was reshared on Facebook and Instagram thousands of times without the mention of parody.

The headline may have seemed plausible to those who also saw a TikTok video of police surrounding an ice cream truck in downtown Ottawa. It accumulated more than 22,000 views on Facebook after being amplified by Canada Proud, a popular group that opposes Prime Minister Justin Trudeau.

When asked if any ice cream trucks were seized on Canada Day, a spokeswoman for the city of Ottawa pointed to the capital's parking regulations and said it cannot seize vehicles, "only tow."

Alison Sandor, a public information officer for Ottawa's By-law and Regulatory Services, told AFP that 125 vehicles were towed for illegally parking in the vehicle control zone during Canada Day events and demonstrations.

"We didn't tow any ice cream trucks," she said.

The city did issue three tickets to ice cream trucks for being "unlicensed," Sandor said, "but not in association" with the picture used in the posts. She said the officers pictured in the fake CTV News article were monitoring events at Strathcona Park and told "an ice cream truck that he couldn't stand in that location, but there were no charges issued."