Facebook posts that appear to show British Prime Minister Boris Johnson and Canada's Prime Minister Justin Trudeau looking at paintings of skulls and mythical creatures have sparked accusations they were admiring Satanic artwork at a NATO summit in Spain in June 2022. However, the images have been doctored. The original photos show Johnson and Trudeau with portraits at Madrid's Prado Museum. The artist who created the images said they were intended as an "artistic experiment" to criticise power.

"NATO summit was held in Madrid, Spain. This is no coincidence; what does this bizarre art tell you?" reads a Korean-language Facebook post shared on July 3.

The post features two photos that appear to show Johnson looking at a painting of a masked figure flanked by skulls, and Trudeau standing next to paintings that depict skulls and bones. 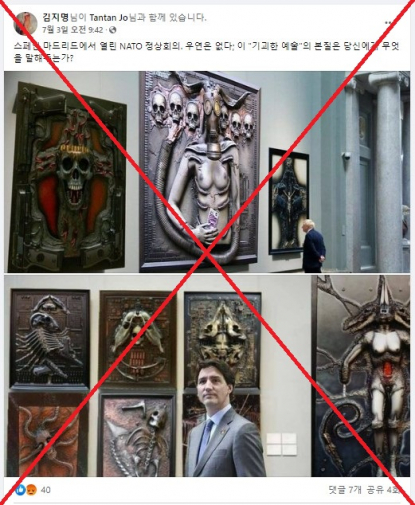 Screenshot of the misleading claim shared on Facebook, captured July 5, 2022.

The images were shared in similar posts in English and Korean, with some social media users claiming they showed the leaders looking at Satanic artwork.

"Photos from the NATO summit in Spain. World leaders posing with "art"… Not satanic at all," read one post.

"These abnormal people are the axis of evil, supporters of the devil Satan," another commented.

The images circulated online after world leaders gathered in the Spanish capital Madrid in June for a NATO summit focused on Russia's invasion of Ukraine.

However, the images have been doctored.

A Google reverse image search found the original photo of Johnson in a June 29 report by Spanish newspaper Público.

The painting is part of the royal collection at the Prado Museum in Madrid, which world leaders visited for a gala dinner on June 29.

The Spanish-language photo caption in Público's article reads: "UK Prime Minister Boris Johnson contemplates Titian's paintings upon his arrival at the Prado Museum for a dinner for heads of state and heads of government attending the NATO summit."

The photo is credited to Spanish news agency EFE.

Below is a screenshot comparison of the doctored photo of Johnson (left) and the original photo (right).

AFP photographer Betrand Guay took several photos of Johnson with world leaders at the Prado, including here and here.

The original photo of Trudeau at the Prado gala dinner was taken by the same AFP photographer.

It shows the Canadian leader standing in front of various portraits.

Below is a screenshot comparison of the doctored photo of Trudeau (left) and the original photo (right).

Meanwhile, reverse image searches traced two of the artworks in the doctored images to paintings by Spanish artist Ramon Llansola, featured on the website Virtual Gallery.

"Ramón Llansola created ART OF THE KAOS (Art of Chaos) in 1994. Influenced by surrealism and industrial music, he began to create using materials and waste products: scrap metal, animal bones and skulls, paint and aerosol debris," the artist's profile reads. 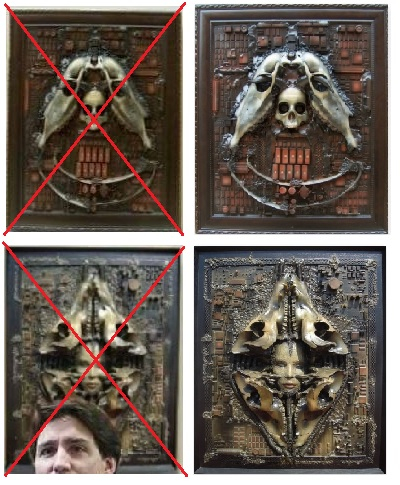 Contacted by AFP, Llansola said he created the doctored photos himself as part of an "artistic experiment".

"It was not intended to deceive anyone. It was an artistic experiment to provoke criticism of power and awaken people's consciousness," he said.

"I would like to apologise to the great artists for borrowing their space in the Prado Museum. I am sorry that the intention of my experiment was misinterpreted."

He said his original artworks were made from waste and recycled material as part of a project on the decline of capitalism and consumerism.

Llansola's DeviantArt page includes several other photos depicting the artwork from the doctored photos, including here. 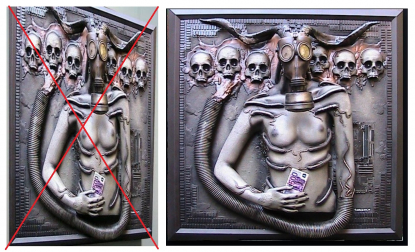