Skip to main content
Protesters walk past a mural reading "there's always hope" during a demonstration in favor of abortion rights in downtown Los Angeles on June 26, 2022 ( AFP / Apu Gomes)

A video posted on Facebook claims abortion is "never medically necessary." This is false; medical experts say that, in some patients, terminating a pregnancy is the only way to save their life.

"Abortion is NEVER medically necessary," says the caption of a video that Live Action, an anti-abortion group, posted on June 26, 2022 on Facebook.

The post followed the US Supreme Court decision overturning Roe v. Wade, the landmark 1973 decision that made abortion a right nationwide. Since then, several states have banned abortion -- and nearly half are expected to do so.

The clip shared in the post, which accumulated more than 481,000 views, shows Kendra Kolb, a physician specializing in neonatal and perinatal medicine and pediatrics, saying: "It is often said that abortion is sometimes medically necessary to protect the life or the health of the mother. This is simply not true." 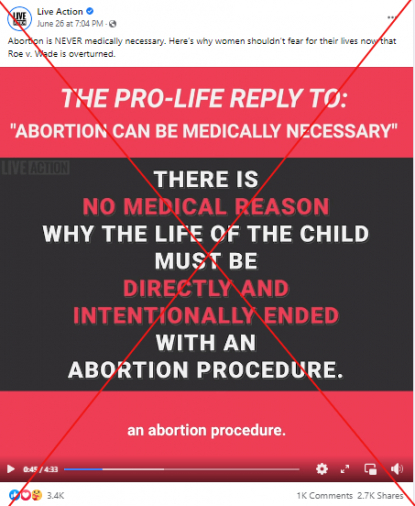 "There is no medical reason why the life of the child must be directly and intentionally ended with an abortion procedure," Kolb continues.

Later in the video, she cites several health conditions and medical complications -- including ectopic pregnancies, when the egg implants outside of the uterus, most often in the fallopian tube -- in which she says the end of a pregnancy is not an "abortion."

However, medical experts told AFP the claim is a distorted, inaccurate understanding of what abortion is -- and it does not reflect the scientific consensus that abortion is sometimes medically necessary.

"In some situations, abortion is the only medical intervention that can preserve a patient's health or save their life," said Iffath Abbasi Hoskins, president of the American College of Obstetricians and Gynecologists (ACOG), in a June 29 emailed statement.

The primary claim in Live Action's post hinges in part on the definition of abortion.

Nicole Freehill, an obstetrician and gynecologist in Louisiana, told AFP on July 7: "Anytime we as physicians say abortion, that just means the ending of a pregnancy -- whether that is medication, a procedure, whether that is a natural process like a miscarriage. Ending a pregnancy other than a regular delivery is considered an abortion."

Freehill added that the term often gets used to only describe "terminating pregnancy when you don't want one." However, she said the terminology refers to "medically necessary and spontaneous things like miscarriage" as well. 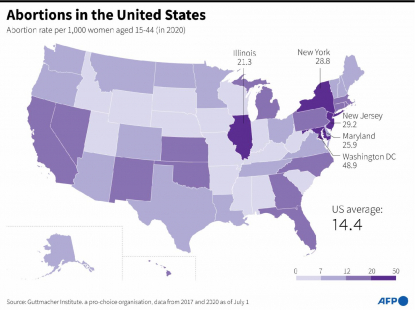 Maps showing reported abortions in the US in 2020, according to data from Guttmacher Institute ( AFP / Valentin RAKOVSKY, Jean-Michel CORNU)

Ectopic pregnancies are an example of when terminating a pregnancy is necessary. Most cases are detected between four and ten weeks after a period has been missed, Freehill said.

"We don't use that terminology for ectopic because they're not ever a normal pregnancy. But technically yes, it is a form of abortion because it is ending the pregnancy," she said. "I have seen many instances where it is medically necessary in order to save a woman's life."

Steven Braatz, an obstetrician and gynecologist and chairman of the American Association of Pro-life Obstetricians and Gynecologists, said in a June 30 statement emailed to AFP that abortion "performed at any stage of pregnancy whose sole aim is to take the life of the unborn baby in its mother's womb" is "never medically necessary."

But he acknowledged that "there are rare times when, to save the life of the mother, it is necessary to separate the baby from its mother's womb at a stage when the baby may have only a slim chance or no chance at all to survive. When such a procedure is performed at a gestational age less than 20 weeks, it's not wrong to use the strictly medical definition of the word, 'abortion.'"

Several medical experts told AFP there are numerous situations in which terminating a pregnancy may be necessary to save the patient's life.

One example is sepsis, a life-threatening response to an infection.

Chavi Eve Karkowsky, a high-risk pregnancy doctor in New York, said on June 30 people who "break their water in the second trimester" -- before viability of the fetus -- are at risk of infection. She recalled a recent case in which a patient was getting septic and needed a pregnancy termination, but there was still a fetal heart rate.

She questioned the merit of waiting to intervene saying: "I will tell you antibiotics will not work until the uterus is empty. The uterus is the site of the infection and while the uterus is full, she will just continue to get sicker and sicker."

Karkowksy said the case was comparable to that of Savita Halappanavar, a 31-year-old woman in Ireland who died of sepsis after a miscarriage. Halappanavar was denied a medical abortion.

She pointed to another patient who came in with heavy bleeding at 20 weeks pregnant. After multiple attempts, the doctor was unable to support her adequately with blood transfusion and recommended termination to avoid putting the patient's life at risk.

"I want to point out that with both these cases, the chance of having a healthy baby out of them is basically zero," Karkowksy said. "She should have been offered a termination if I value the maternal life. Do I need to wait for her to almost die?"

Other examples of high-risk pregnancies include cases of mirror syndrome and preeclampsia, serious medical conditions that typically occur after the 20-week gestation mark.

Kristyn Brandi, a complex family planning specialist and board chair of the advocacy group Physicians for Reproductive Health (PRH), said rare complications such as molar pregnancies can also necessitate termination.

Hoskins of ACOG added that pregnancy can also worsen existing conditions, such as renal or cardiac disease.

"These and other illnesses can severely compromise health. They can cause death," she said. "Without question, abortion can be medically necessary."

Cancer therapy, which is mentioned in the Live Action video, is another instance in which ending a pregnancy is sometimes vital to the survival of a patient. But according to Freehill, the Louisiana obstetrician and gynecologist, "it really is on a case-by-case basis" whether termination is on the table.

"Every scenario has to be considered because there are definitely still high-risk pregnancies that can put moms at risk, but not to the degree that some others do," she said.

Prior to the Supreme Court's decision, 13 US states had adopted so-called "trigger laws" designed to outlaw abortion upon the overturn of Roe. Those laws differ in the extent to which they permit medically necessary abortion.

In Missouri, for example, abortion has been completely banned -- including in cases of rape and incest. The sole exception is for "medical emergency," which the state legislation defines as cases in which delayed action would cause a "serious risk of substantial and irreversible physical impairment of a major bodily function of the pregnant woman."

"Some of these trigger laws -- and I can speak most towards the one in Louisiana because it's the one I'm most familiar with -- are very vague," Freehill said. "There is this grey zone of, 'What do we consider enough risk to say the mom's life is at risk?'" 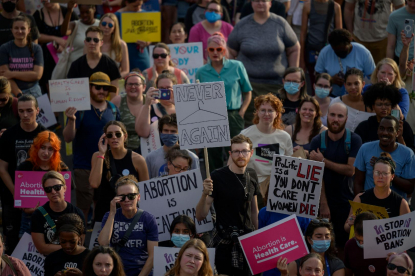 Abortion rights activists protest outside the Planned Parenthood Reproductive Health Services Center after the overturning of Roe v. Wade by the US Supreme Court, in St Louis, Missouri on June 24, 2022 ( AFP / ANGELA WEISS)

Researchers from Parkland Health and the University of Texas Southwestern Medical Center looked at the impact on maternal morbidity of a 2021 Texas law that effectively bans abortions as soon as there is a fetal heartbeat. The legislation includes strict definitions of medical emergencies.

The pre-proof study, which is set to be published in the American Journal of Obstetrics and Gynecology, says expectant management -- in which medical intervention is performed only when there is an immediate threat to maternal life -- "resulted in 57 percent of patients having a serious maternal morbidity compared with 33 percent who elected immediate pregnancy interruption under similar clinical circumstances reported in states without such legislation."

Waiting longer to intervene was more dangerous for the pregnant patient and it did not result in more babies surviving. "The primary perinatal outcome was fetal or neonatal demise," the researchers wrote.

Jamila Perritt, president of PRH, said in a June 29 statement that abortion "is an essential medical intervention."

"As an (obstetrician and gynecologist) who has practiced evidence-based medicine in my own community for more than a decade, I know that the full spectrum of reproductive health care must always include abortion care," she said.

All articles
ABORTION US POLITICS