This video shows a temple in India, not in flood-affected Bangladesh

A video clip has been viewed tens of thousands of times in Facebook posts that claim it shows a temple standing in the middle of raging floodwaters in northeastern Bangladesh in June 2022. The claim is false; the video has circulated online since at least September 2021 and it actually shows a temple in Madhya Pradesh, a state in central India.

"Thousands of houses are being submerged in the river in Sylhet-Sunamganj, but the house of God is still standing with its head held high," reads the Bengali-language caption of this Facebook post on June 20, 2022.

The 30-second video, which shows a temple-like structure standing in the middle of strong water currents, has garnered more than 32,000 views. 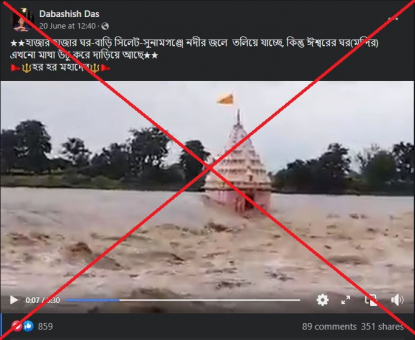 The same video clip was shared here and here on Facebook with similar claims.

A reverse image search on Google shows an identical video was posted on YouTube by an India-based user on September 15, 2021.

Sarangpur is a town in Madhya Pradesh state, in central India.

Below is a screenshot comparison of the video in the misleading post (L) and the genuine video on YouTube (R):

According to the official government website of Rajgarh district, where Sarangpur is located, the Kapileshwar Mahadev Temple was built in the middle of the Kali Sindh River.

A photo of the temple can be seen on the website here. 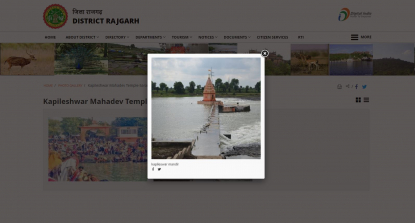 Photo of the Kapileshwar Mahadev Temple on the Rajgarh district website

Google Maps also puts the temple at Kali Sindh River and Google  images of the temple correspond with the structure seen in the video.