Missouri law does not prevent pregnant people from initiating divorce

Social media posts claim pregnant people cannot get divorced in Missouri. This is misleading; Missouri law does not prevent the initiation of divorce proceedings while pregnant, but family law experts said a pregnancy must be disclosed to the judge, who may delay a final ruling until after the birth in order to resolve custody.

"In Missouri, women cannot get divorced if they are pregnant," says a June 24, 2022 post on Twitter. "With Roe v Wade overturned, what do you think will happen to abused wives in that state?"

"Now here's a fun little fact: Did you know that, in Missouri, if you're pregnant you can't get divorced?" said Jessica Piper, a Democratic candidate for the state's House of Representatives, in a May 13, 2022 TikTok post. 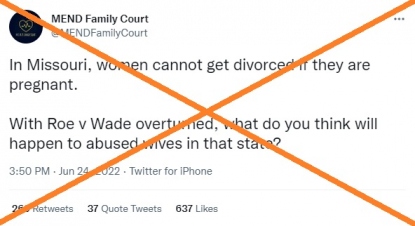 The posts spread online after the US Supreme Court ruled June 24 to overturn Roe v. Wade, the landmark 1973 decision that established the right to abortion nationwide.

Missouri was the first state to outlaw abortion following the ruling, and nearly half are expected to pass other restrictions. There are no exceptions to Missouri's abortion ban, including for cases of rape or incest.

Missouri requires those seeking a divorce to disclose whether they are pregnant, and judges often do not finalize separations until a baby is born. But the law does not prevent pregnant people from initiating a divorce, as other media outlets have reported.

Barbara Glesner Fines, dean of the University of Missouri-Kansas City (UMKC) School of Law, told AFP that while Missouri law "does provide that a petition for divorce must identify whether the wife is pregnant," the law does not explicitly bar courts from "granting a divorce because a party is pregnant."

She said it often comes down to local court practice "either as judicial interpretation of their authority under the statute or as an exercise of inherent authority to regulate their dockets."

Lawyers and experts told AFP that, in practice, divorce proceedings in Missouri do get delayed pending the birth of a child.

That is because the state's courts like to settle paternity and custodial issues before finalizing a divorce, according to several local law firms. Missouri law "presumes that the husband is the father of the child, and will require a delay to handle the care and custody of the child after it is born," the Marks Law Firm says on its website.

"Courts like issuing one complete judgment, and custody rights and obligations only attach after the birth of a child -- courts cannot grant visitation to a fetus or child in utero because they are speculative," the firm says.

John Kershman, a founding partner at the family law firm Ahearn Kershman, agreed. He pointed to an opinion in which the Missouri Supreme Court said a dissolution of marriage "must resolve the issue of custody, in order to be deemed a final judgment."

Kershman said in an email: "Generally speaking, pregnant people can initiate a divorce in Missouri -- it is just that the divorce cannot be finalized until the child is born." He said the state seeks to ensure "the best interests of the child."

That is not always the case. Glesner Fines said there is "an entire line of cases in Missouri in which courts have been asked to go back and add supplemental orders to divorce judgment to account for custody and support of a child born after the divorce was finalized."

"It's necessary if you don't want further litigation regarding parentage, custody and support mere months later," said Mary Kay O'Malley, director of the Child and Family Services Clinic at the UMKC School of Law. "The cost to litigants and judicial economy are considered."

Arizona, Arkansas and Texas have practices similar to Missouri, according to local law firms. In Washington state, meanwhile, an appeals court ruled in 2009 that denying a divorce to a woman solely based on her pregnancy would violate the state's Equal Rights Amendment which "absolutely prohibits discrimination on the basis of sex."

AFP has fact-checked other claims about reproductive rights here.

All articles
ABORTION US POLITICS