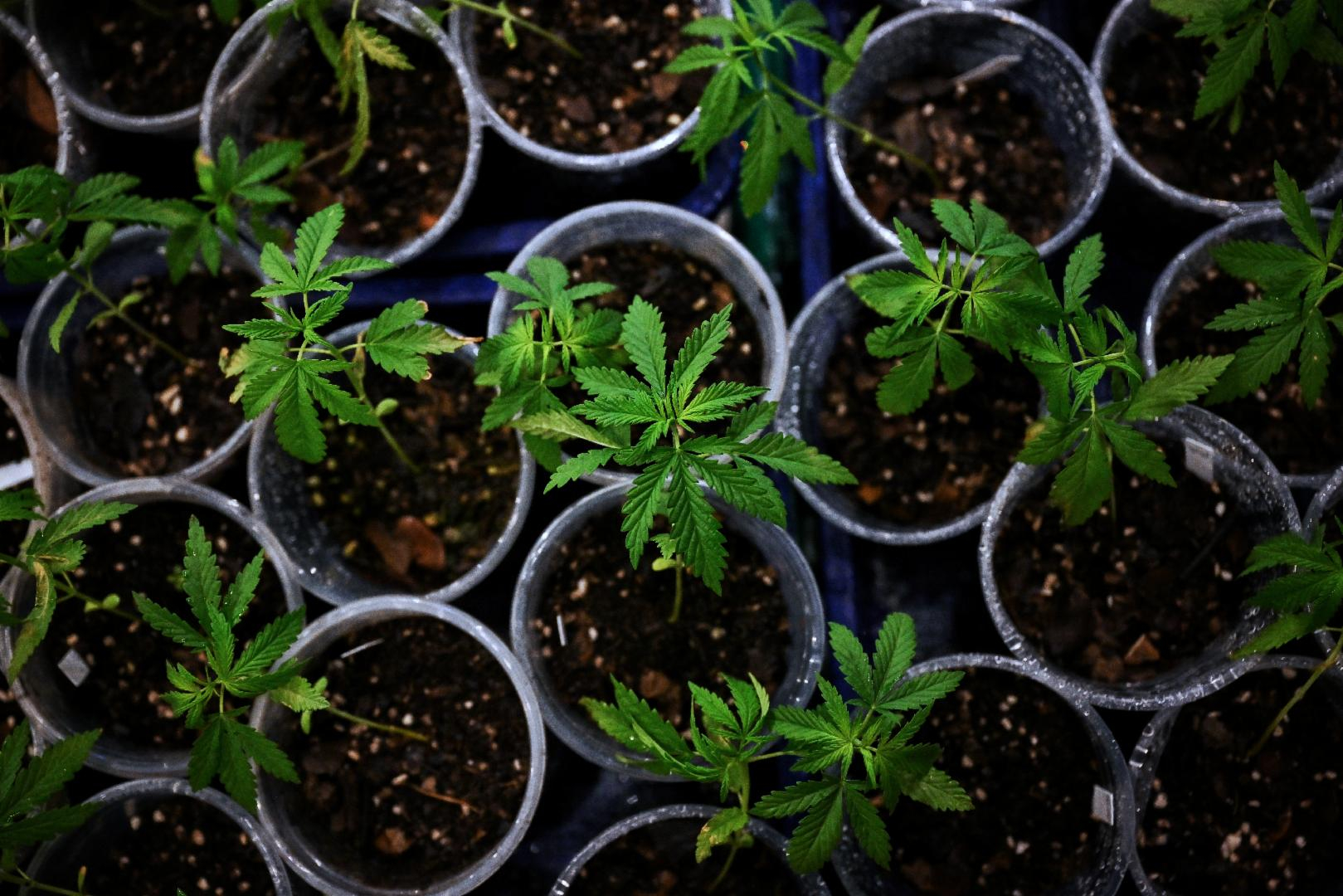 Plants on display to celebrate the legalisation of cannabis at the “Thailand: 420 Legalaew!” weekend festival hosted by Highland in Nakhon Pathom province on June 11, 2022. ( AFP / Lillian SUWANRUMPHA)


After Thailand announced it would relax its cannabis laws in June 2022, an infographic juxtaposing the health benefits of the drug against the dangers of alcohol circulated across multiple social media posts. However, health experts say the claims are misleading -- while cannabis can alleviate some health conditions, the infographic overstates its healing properties.

The infographic was shared here on Facebook on April 9, 2022, with the caption "facts that we should know".

It contains two columns comparing the purported effects of alcohol and cannabis:

"Alcohol: waste of money; Ganja: valuable and worth the cost 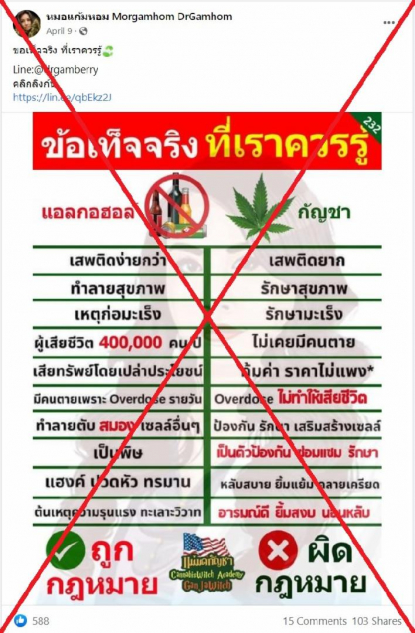 The infographic circulated after Thailand announced in February that cannabis would be removed from the country's list of banned narcotics.

The relaxation of the country's cannabis laws came into effect in June 2022, shifting from previously stiff penalties towards decriminalising possession and cultivation -- as long as products made with the plant contain less than 0.2 percent of the psychoactive compound tetrahydrocannabinol (THC).

The same image has been shared alongside similar claims on Facebook here, here and here.

However, health experts said the infographic was misleading, selectively pitting the worst effects of alcohol against some of the positive effects of cannabis and is like "comparing sheep to goats".

"Prolonged use of cannabis poses a risk to our body organs, such as the lungs and the brain," said Dr Adisornsuda Fuengfoo, a specialist in child development with the Royal College of Pediatricians of Thailand.

Dr Thira Woratanarat, an associate professor of preventive medicine at Thailand's Chulalongkorn University, also told AFP that long-term use of cannabis could alter the brain's structure.

"Studies have shown long-term-marijuana use can have lasting effects on the user's cognitive abilities, such as memory, learning, and motivation," Thira said.

Marijuana is the third most commonly used addictive drug after tobacco and alcohol, according to  the United States National Institutes of Health.

Both alcohol and compounds found in the marijuana plant are addictive and should not be directly compared, Thira said.

"When we take a substance, our bodies will develop more tolerance, which in turn pushes the user to take a higher dosage to experience the same effects," he explained.

Thira noted that the use of cannabis in modern medicine "remains limited" and is used only as an alternative treatment.

In Thailand, cannabidiol (CBD) -- the second most prevalent active ingredient in cannabis -- has been approved for medical use, but Adisornsuda said the claim that cannabis "nourishes health" is false.

"Saying cannabis is healthy is not accurate," she said.

AFP has debunked the claim that cannabis can treat cancer and other diseases here.

CBD has been approved for use to mitigate the side-effects of cancer treatment, which could include nausea and lack of appetite, Dr Nicha Zungsontiporn, a lecturer from the oncology division of Chulalongkorn University and The King Chulalongkorn Memorial Hospital told AFP previously.

It is not used as a "direct treatment", she said.

Adisornsuda said: "In Thailand, medical marijuana is approved for use in children in two cases, to treat severe seizures and for terminally ill cancer patients to ease their pain."

Claim: Cannabis 'has not caused deaths'

According to a press release from Thailand's Ministry of Public Health on July 11, 2022, 14 cases of hospitalisation related to cannabis use among individuals below the age of 20 were recorded between June 21 and July 10 -- after the kingdom relaxed its laws.

Adisornsuda said the effects of overdosing on marijuana can vary from person to person and could be lethal in extreme cases, such as in people with severe allergies.

"Cannabis can induce hallucinations or paranoia, while in severe cases we have recorded the user becoming agitated and violent."

Thira also said the claim was false and noted a study in the US state of Oregon, conducted between 2015 and 2017, which recorded the death of one 70-year-old man who developed chest pain and palpitations within minutes of inhaling a THC concentrate.