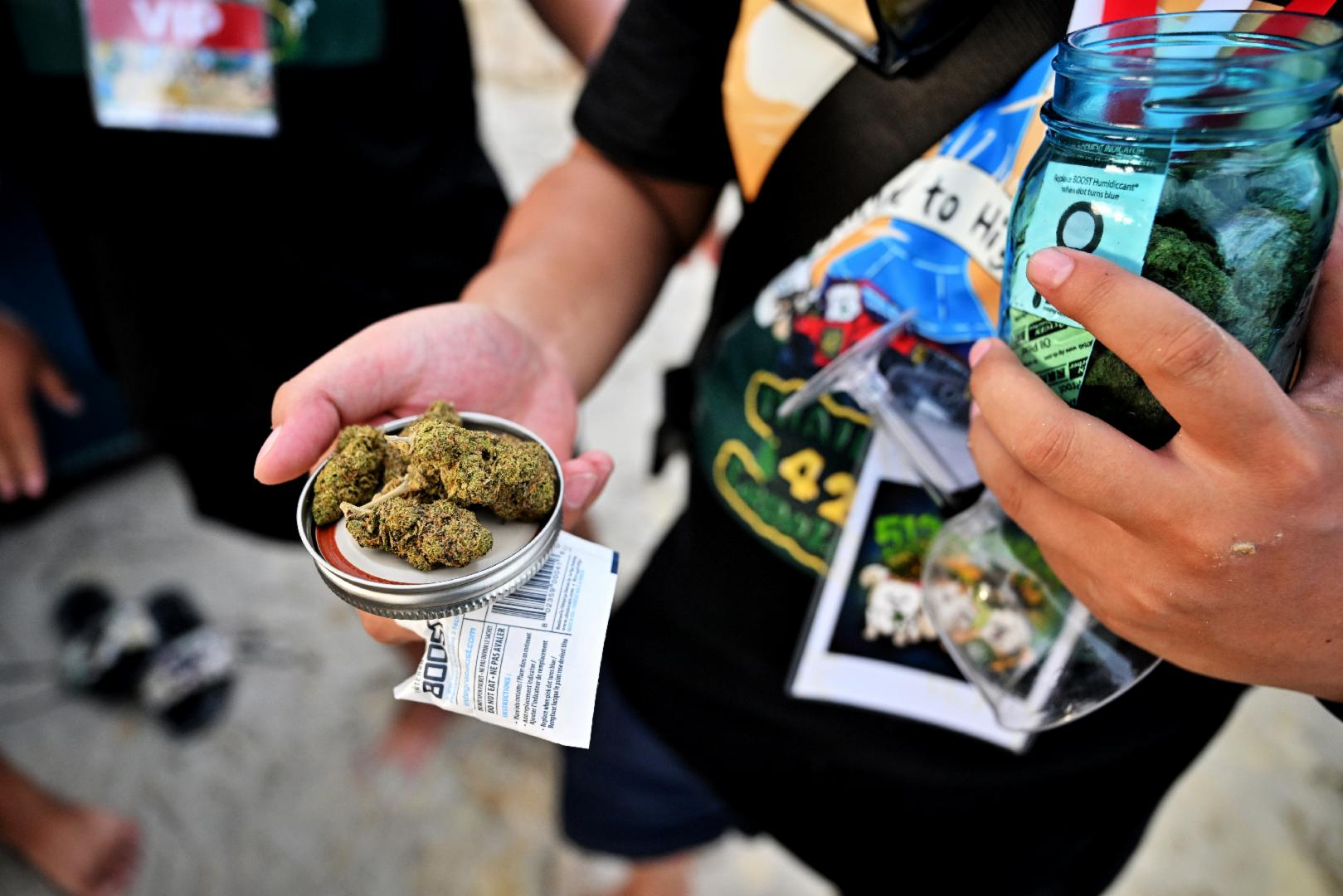 A man displays buds to celebrate the legalization of cannabis at the “Thailand: 420 Legalaew!” weekend festival hosted by Highland in Nakhon Pathom province on June 11, 2022. ( AFP / Lillian SUWANRUMPHA)

As Thailand relaxed cannabis laws in June 2022, Facebook posts circulated with a claim that taking "one to two drops of marijuana daily can cure 39 diseases", including Alzheimer's, diabetes and high blood pressure. However, the posts are misleading; there is no evidence that cannabis or its derivatives can cure these ailments, but they can be used to alleviate certain conditions, according to health experts. They told AFP the use of cannabis for medical purposes should be monitored by a healthcare provider.

"Be informed before using #ganja to look after your health," reads a Thai-language Facebook post from June 11, 2022, shared over a hundred times.

An accompanying infographic contains images of dropper bottles and Thai-language text that translates to English as: "39 terrible diseases can be cured, just take 1-2 drops before bed each day. Works as both treatment and protection."

Cannabis extracts cover a broad range of products that generally contain high concentrations of cannabinoids, chemical substances found in the cannabis plant. These can be sold in solid or liquid form, which can then be placed under the tongue using a spray or dropper.

The psychoactive tetrahydrocannabinol (THC) is the best known cannabinoid, while cannabidiol (CBD) does not produce a "high" but has been shown to be effective for a range of conditions such as anxiety or insomnia. 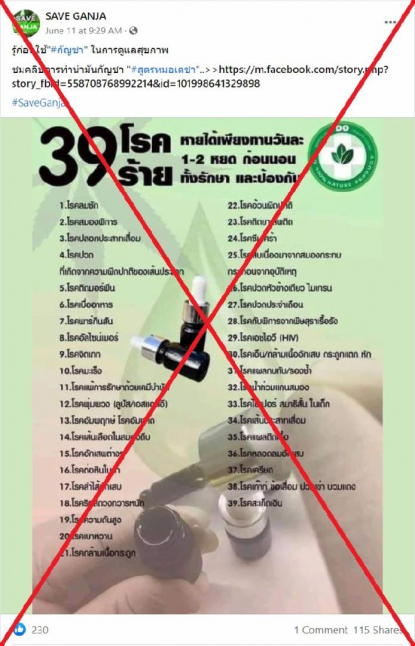 The posts circulated as Thailand -- where people caught with cannabis previously faced up to ten years in prison and a hefty fine -- relaxed its laws on June 9 2022, allowing permitted users to possess and grow the plant under new guidelines.

Marijuana has been used as a traditional herb for centuries in Thailand but was banned decades ago.

While CBD has been approved for medical use, cannabis extracts with more than 0.2 percent concentration of THC remain illegal.

The infographic has also been shared with a similar claim on Facebook here, here, here and here.

However, health experts told AFP the claim is misleading.

Associate professor of preventive medicine at Thailand's Chulalongkorn University Dr Thira Woratanarat -- who would only comment on the legalised CBD -- said most of the diseases and conditions mentioned in the claim have not been proven treatable with the substance.

Thira said it is a proven alternative treatment for patients undergoing chemotherapy, patients with cerebral palsy, chronic pain and to alleviate seizures.

"It is not a replacement but can be used as an alternative in case the main medicine is unavailable," said Thira, who also noted that it has been proven safe and efficient within a limited scope.

However, other conditions -- such as Alzheimer's, diabetes, depression and HIV that are mentioned in the misleading posts -- have not been clinically proven to be treatable with CBD.

He urged patients wanting to take CBD for its purported health benefits to seek medical advice.

Not for direct cancer treatment

Dr Nicha Zungsontiporn, a lecturer from the oncology division of Chulalongkorn University and The King Chulalongkorn Memorial Hospital, also told AFP on June 20, 2022, that extracts from marijuana cannot be used to treat cancer directly.

"It is not used as a direct treatment for cancer patients, but is used to mitigate the side-effects of the treatment process," she added, which could include nausea and lack of appetite.

Meanwhile, Thira warned that daily use of CBD could lead to substance dependency.

"Continued use will result in our body's increased tolerance, which can lead to a need for higher dosage."