This photo shows Mayan-inspired Batman sculpture from 2014 exhibition, not an ancient artefact

A photo has been shared in multiple Korean-language social media posts that claim it shows a Batman sculpture "worshipped by the ancient Mayans". The claim, however, is misleading -- the piece was created by a Mexican artist for a 2014 exhibition commemorating the 75th anniversary of the superhero character's conception.

"Batman worshipped by the ancient Mayans," reads the Korean-language claim shared here on Facebook on June 9, 2022.

The accompanying image appears to show a sculpted Batman bust in the style of ancient Mesoamerican art. 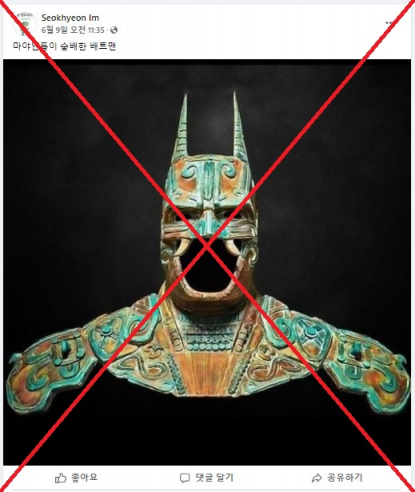 The image has circulated in English-language Facebook posts that claim it is an "ancient Mayan batman" since at least 2019, including here, here, here and here.

Korean-language posts with the identical claim were shared in 2022 on South Korean social media platforms KakaoStory here and Inven here.

It is also featured in this YouTube video, which purports to discuss various "historical mysteries" and has been viewed more than 130,000 times. It presents the bust as a genuine Mayan artefact.

Some users appeared to have believed the bust was a historical piece.

"The Mayan Batman artefact is a shock. It is amazing they were able to make such an elaborate object at that time," wrote one user on YouTube.

"The creators of Batman appear to have copied [the Mayan artefact]," wrote another.

A Google reverse image search found the original photo on the website of Kimbal Studio, a design studio based in Merida, Mexico.

The artwork is titled "Batman Camazotz".

The Camazotz is a Mayan bat god, often associated with night, death and sacrifice.

A Spanish-language description under the sculpture reads: "Warner Bros. Entertainment with the support of the Mexican Museum of Design (MUMEDI) invited 30 artists to participate in the exhibition 'BATMAN A TRAVÉS DE LA CREATIVIDAD MEXICANA (Batman through Mexican creativity)' for the development and intervention of fibreglass sculptures of the character on the occasion of his 75th anniversary."

It further states that the piece was a tribute to Mexico's pre-Hispanic past, taking inspiration from Camazotz and artefacts found in an ancient Mayan temple in the archaeological site of Palenque, in the southeast of the country.

Below is a screenshot comparison of the image in the misleading posts (left) and the photo of the sculpture published on Kimbal Studio's website (right):

Kimbal Studio also published a photo of the piece on art sharing social media platform Behance, along with other photos showing the creative process behind the sculpture.

The Mexican Museum of Design (MUMEDI) in Mexico City featured the piece in an exhibition titled "Batman through Mexican creativity" from September 4 to October 8, 2014.

The piece can also be seen at the 13-minute 45-second mark in this YouTube video showing a visit to the exhibition.

US broadcaster ABC10 News also debunked the claim in this news segment, posted to YouTube on May 30, 2019.