Supporters of US President Donald Trump march through the streets of the city as they make their way to the Capitol Building in Washington DC on January 6, 2021 ( AFP / Joseph Prezioso)

Social media posts, politicians and media pundits have claimed that a Federal Bureau of Investigation agent named Ray Epps helped incite violence at the Capitol on January 6, 2021. This is misleading; while Epps, a supporter of former president Donald Trump, was in Washington in the lead-up to the attack, he told congressional investigators he has no ties to the FBI -- and evidence suggests he tried to calm the rioters.

"Ray Epps is just one of 25 FBI agents dressed up like Patriots that instigated the January 6th fiasco," says the caption of a Facebook post published June 12, 2022. "Just putting that out there since they won’t tell you that on the prime time hearings."

The post includes a video, viewed more than 6,600 times, that purports to show Epps before the Capitol insurrection. The clip was first published on TikTok, where it accumulated more than 240,000 views, and interest has risen again in June 2022 with the January 6 committee taking evidence about the fatal attack.

Similar claims about Epps have circulated on Facebook, Twitter and Instagram, according to CrowdTangle, a social media insights tool. Republican politicians including Congressman Madison Cawthorn and Congresswoman Marjorie Taylor Greene, as well as pundits such as Newsmax host Greg Kelly, have promoted similar theories.

Allegations about Epps have circulated on social media, at political rallies and in Congress for more than a year. Their resurgence online comes as the congressional panel makes a case that the violence was the culmination of an orchestrated attempt by Trump and his aides to overturn the results of the 2020 election, which he lost to Joe Biden.

Epps, the owner of a wedding and event venue in Arizona at the time of the Capitol riot, was filmed in Washington before the attack. His photo also appeared on -- but was later removed from -- a section of the FBI's website seeking the public's help in identifying those involved in the insurrection.

However, the US House committee investigating the Capitol attack has discounted what it called "unsupported claims" that Epps was an FBI informant.

"The Committee has interviewed Epps," the panel said in a January 11, 2022 Twitter thread. "Epps informed us that he was not employed by, working with, or acting at the direction of any law enforcement agency on Jan 5th or 6th or at any other time, & that he has never been an informant for the FBI or any other law enforcement agency."

How the theory spread

Allegations that the Capitol attack was a "false flag" operation -- political or military action that is carried out with the intention of blaming an opponent -- first circulated online soon after the tumult. But theories pinning the violence on the FBI and Epps took months to gain traction online.

On June 14, 2021, a website called Revolver News published an article claiming there was a "strong possibility" the US government had "undercover agents or confidential informants embedded within the so-called militia groups" at the Capitol on January 6. The next day, Fox News host Tucker Carlson aired the theory, claiming on his show that "FBI operatives were organizing the attack on the Capitol." 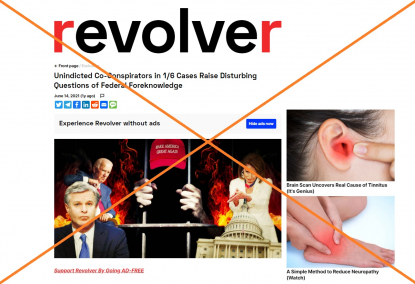 So-called false flag operations have been blamed by conspiracists for mass shootings in the United States and other international crises.

Underpinning the January 6 allegations was the claim that unindicted co-conspirators -- people who are named or alluded to, but not charged, in criminal conspiracy indictments -- listed in federal charging documents referred to federal agents. Legal experts told multiple news outlets that assertion was baseless, as undercover operatives cannot be described in government filings as unindicted co-conspirators.

But the conspiracy theory spread regardless. Multiple Republican politicians, including Greene and Congressman Matt Gaetz, shared it in their social media feeds.

As reported by The Washington Post, Epps' connection to the theory appears to stem from a June 17, 2021 Twitter thread from a now-suspended user.

"On Jan 5th, the night before the infamous Jan 6th Capital Event, this Fed was caught on camera encouraging the crowd to raid the capital on the next day," says an archived tweet, which includes a still from a video. "Who is Ray Epps?" 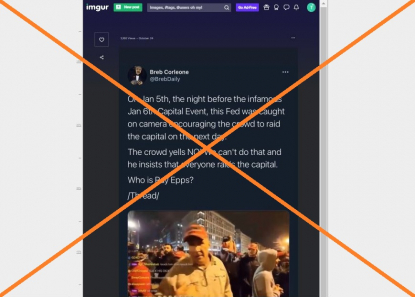 Screenshot taken from Archive.today on June 14, 2022

The still resembles the video posted on Facebook and TikTok. The same clip, purportedly taken in Washington, was tweeted January 5, 2021.

As the Arizona Republic reported, the clip appears to show Epps -- former president of the Arizona chapter of the Oath Keepers, a far-right group whose members were involved at the Capitol -- talking about plans to go inside the building.

"Tomorrow, I don't even like to say it because I'll be arrested ... we need to go into the Capitol," he said in the clip.

In another angle of the video posted on YouTube, Epps is shown saying that he thinks the protesters should go "peacefully." In response, the crowd shouts "Fed" repeatedly.

Additional footage taken just before the riot shows a man resembling Epps pulling back and whispering in the ear of a man attempting to breach a police barricade.

IMPORTANT: this is exact moment the siege of the Capitol building began as the two men in front ripped down a preliminary barrier & rushed officers who were behind a 2nd barrier

They then encouraged others to follow their lead. Officers appeared to be taken completely off guard pic.twitter.com/LE0a01PXBi

The theory that Epps was an undercover agent gained more traction in late 2021, when The New York Times reported that the FBI did have an informant in the crowd during the riot -- albeit one who "traveled to Washington at his own volition" and did not have prior warning of the attack.

On October 21, Republican congressman Thomas Massie aired several clips of Epps during a congressional hearing. A little more than a week later, Fox host Carlson released a documentary series called "Patriot Purge" that again floated the idea that the insurrection was an FBI-led false flag operation. And in a January 2022 rally, Trump himself promoted the conspiracy theory.

With the January 6 committee hearings under way in Washington, claims pinning the Capitol attack on Epps were back in Americans' social media feeds. Misinformation experts say it is part of an ongoing effort to shift blame for the actions of those involved in the insurrection.

"Motivated reasoning is key to understanding this: The conspiracy theory acts as evidence that the people on one's political side or in their party aren't so bad, they were merely egged on by a nefarious deep state plot," said Adam Enders, an assistant professor of political science at the University of Louisville. 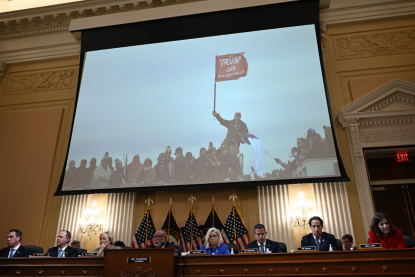 Scenes from January 6, 2021 are shown onscreen during a House Select Committee hearing to Investigate the January 6th Attack on the US Capitol, in Washington, DC on June 9, 2022 ( AFP / Brendan Smialowski)

Ethan Porter, an assistant professor of media and public affairs at George Washington University, agreed, saying the theory is "not a denial that something happened -- it's a denial of responsibility, of culpability."

"If I were a Trump supporter, I would have to reconcile my support for Trump with what happened that day," Porter told AFP.

More than a year after they first emerged online, claims that Epps is an FBI informant remain unproven. Multiple news organizations have reported on the matter.

Epps' lawyer, John Blischak, told AFP that, in addition to meeting with the January 6 committee, the pair "personally met with the FBI and answered all their questions."

"There has been no evidence established that Mr. Epps was a former FBI agent nor did he receive any compensation from the FBI," Blischak said in an email.

The US attorney's office in the District of Columbia has charged more than 800 people in connection to the Capitol riot. Epps is not one of them, nor is he wanted by the FBI. 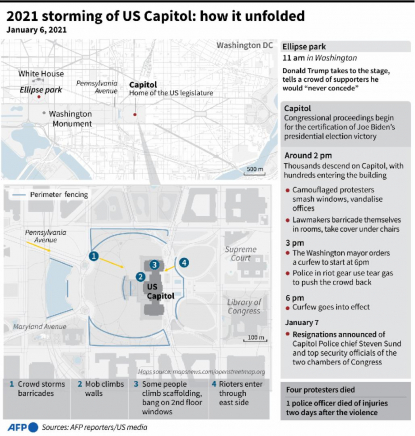 Map and factfile on the Capitol in Washington, DC, stormed by Donald Trump supporters on January 6, 2021 ( AFP / STAFF, Laurence CHU)

Michael Jensen, a senior researcher at the University of Maryland's National Consortium for the Study of Terrorism and Responses to Terrorism (START), told AFP in an email that there is "absolutely no evidence" that Epps was an FBI informant on January 6.

"These claims, which have been circulating online for months and have been pushed by some Republicans in Congress and right-wing TV personalities, have been decisively debunked," he said.

Jensen added that Epps "has consistently referred to himself as a Trump supporter that attended the January 6th rally because he firmly believed the election had been stolen from the former president."

Jensen also pointed out that audio submitted in court in June revealed that in interviews with the FBI after the attack, Epps told investigators that he was trying to calm the rioters.

AFP reached out to the January 6 committee for additional comment. The FBI declined to comment for this article.

All articles
US POLITICS US Elections 2020