Following a row about the portrayal of an Indian warrior-king in a Bollywood movie, Facebook and Twitter posts claimed that a court instructed film-makers to present the character as belonging to the historic Gujjar clan rather than the Rajput community. However, the Delhi High Court dropped a petition about Prithviraj Chauhan's identity in the film, while the posts show a doctored news report.

"Delhi High Court said 'Samrat Prithviraj' will present Chauhan as Gurjar and not Rajput," it adds in Hindi.

The Rajputs are a Hindu warrior clan that historically ruled over kingdoms in western India, while the Gujjars are traditionally shepherds concentrated in the north.

Petitioners fought in Delhi's High Court to suspend the film's release by arguing that it wrongly depicted Prithviraj as Rajput rather than Gujjar, as the two communities each claimed the ruler belonged to their clan. 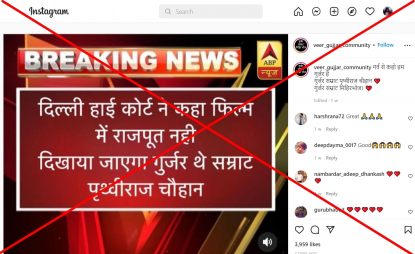 "Gurjar Emperor Mihir Bhoj" refers to a similar row that erupted in September 2021, when a statue of the ninth-century ruler was set to be unveiled in the northern state of Uttar Pradesh.

The state's chief minister Yogi Adityanath attempted to placate both clans by saying great men were beyond caste and region.

Delhi's High Court dismissed the claim that the film presented Prithviraj as Rajput, according to the judgment handed down on June 1 which said the petition was "disposed of".

The court was told that the film was "caste neutral" and "the character of Prithviraj Chauhan in the said film is not portrayed either as Rajputs, or as Gurjars".

"In the light of the said statement, the petitioner states that he is satisfied and, therefore, does not press this petition any further," the judgment reads.

The judgment and news reports about the case (here and here) do not say that Prithviraj "will be presented as Gurjar", as the screenshot circulating on social media claims.

"A fake screenshot is viral claiming to be taken from ABP news. ABP News has not broadcast any such news," it posted on Facebook and Twitter on June 6.