Two photos have circulated online in social media posts that claim Turkey's President Recep Tayyip Erdogan personally greeted Pakistan's former premier Imran Khan at the airport when he visited Turkey, while the current Pakistan Prime Minister Shehbaz Sharif was greeted by the Turkish defence minister. The posts -- shared hundreds of times -- are misleading. While the photo of Sharif has been shared in the correct context, the photo of Khan shows him greeting Erdogan in Pakistan, not Turkey, in 2020.

The two images were shared in this Urdu-language tweet on June 1, 2022.

The post translates to English as: "When Imran Khan went to Turkey, Turkey's President Tayyip Erdogan came to receive him himself.

"Showbaz Sharif [Shehbaz Sharif] arrived in Turkey with 54 people and their local minister is greeting them." 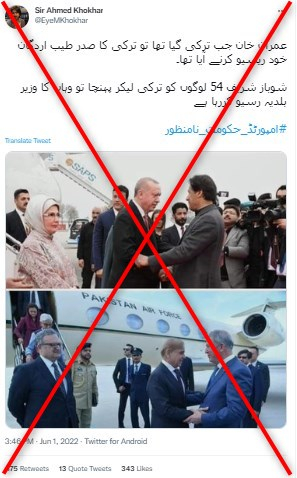 The two nations have enjoyed strong relations, with Turkey backing Pakistan on the international stage -- particularly in the dispute with India over Kashmir.

Khan has since staged massive rallies against the fragile coalition government, sometimes mockingly referring to Sharif as "Showbaz".

However, the photo of Khan with Erdogan has been shared in a misleading context.

Below is a screenshot comparison of the photo in the misleading posts (left) and the image from PTI (right):

The photo can also be seen in this report by Turkish broadcaster TRT World from February 13, 2020.

"Erdogan will co-chair a high-level meeting with Khan during his visit — the fourth since 2002, and second since he became president," the report reads.

The second photo can be seen in this report published by state news agency Associated Press of Pakistan (APP) on May 31, 2022.

The caption reads: "PM Shehbaz Sharif received by Turkish Defence Minister Hulusi Akar on arrival in Ankara on May 31, 2022."

It was Sharif's first official visit to Turkey since becoming prime minister.

Although he was greeted at the airport by the Turkish defence minister, Sharif met Erdogan at the Presidential Complex in Ankara the next day, as shown in this AFP photo published by Arab News, an English-language newspaper based in Saudi Arabia.

AFP has debunked a wave of misinformation following Khan's removal from office, including a similar photo comparison of London bus ads purportedly shown during the two leaders' tenures.