Skip to main content
Pallbearers carry the casket of Amerie Jo Garza, who died in the mass shooting at Robb Elementary School, during her funeral mass at Sacred Heart Catholic Church in Uvalde, Texas, on May 31, 2022 ( AFP / Chandan Khanna)

The deadly mass shooting on May 24, 2022 at Robb Elementary School in Uvalde, Texas sparked claims on social media that the event was a staged "false flag" operation. This is false; information from multiple sources shows the killing spree caught the community by surprise, and the claims replicate previously debunked conspiracy theories about other mass shootings in the United States.

"We were told this was going to be the 'Summer of Rage' of False flags by the Deep State. These shootings are all set up," says a Facebook post published June 1, 2022, days after a gunman killed 19 children and two teachers in Uvalde. The massacre came only days after a separate shooting spree in Buffalo, New York that left 10 dead.

Similar messages were shared elsewhere on Facebook and Twitter, with some appearing to claim the attack was orchestrated for political reasons -- including to push gun control measures. 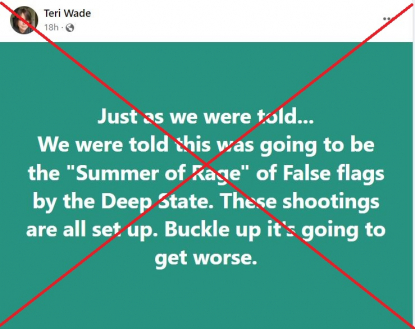 Despite the claims, a range of sources have corroborated key information about the Uvalde school attack, including Texas Governor Greg Abbott and the Department of Public Safety. Television stations and other media widely reported on the aftermath of the massacre as the small town held funerals for the victims.

Uvalde Memorial Hospital and a hospital in San Antonio provided updates as they received wounded and dead victims after the shooting spree.

Some posts suggested the victims were "crisis actors" -- people who volunteer or are paid to portray disaster victims -- and that their photos had appeared after other violent incidents. Those who made such posts offered no evidence to back up the claims.

The suggestion of a staged event echoes similar claims that have circulated online after other mass shootings in recent years, including a 2017 killing spree in Las Vegas, the 2018 attack on a school in Parkland, Florida, and the 2012 Sandy Hook school massacre in Connecticut.

"There are people who believe this (conspiracy theory) after every shooting," said Joseph Uscinski, a University of Miami political scientist who researches misinformation and conspiracy theories.

Uscinski said that while the motivation of people spreading such rumors is not always clear, some social media operators can monetize dubious content. 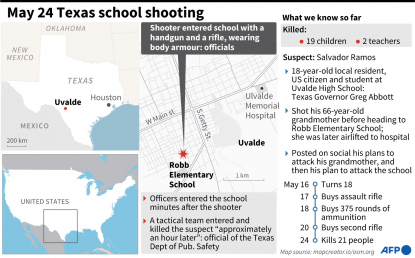 Factfile on the shooting at an elementary school in Uvalde, Texas, US, where a teenage gunman killed 19 young children and two teachers on May 24, 2022 ( AFP / STAFF, Janis LATVELS, Laurence CHU)

In one well-known case, a judge found InfoWars and its founder, Alex Jones, liable for damages for repeating false claims that the Sandy Hook shooting was a hoax -- despite detailed information about the attack. Jones also defied court orders to disclose his finances.

Uscinski added: "People who are disposed to believing conspiracy theories will go to the internet to seek them out."

Other researchers say social media amplifies the spread of "alternative narratives" about events such as mass shootings.

"These narratives can also be thought of as 'conspiracy theories' which claim powerful people orchestrate events to exercise and protect that power, and that they conceal their role by framing others," wrote University of Washington researcher Kate Starbird in a paper presented at a 2017 conference on the internet and social media.

"We can also understand the production of these narratives as a form of collective sensemaking whereby people attempt to reduce their uncertainty and anxiety and increase their sense of control by providing explanations of the events — in this case, explanations that are informed by deep skepticism of official sources and an epistemic orientation that seeks causal, intentional explanations for complex, random events."