After the parent company of fast-food giant KFC said it was suspending operations in Russia, social media posts shared hundreds of times purported to show a photo of a branch that "rebranded as Siberian Fried Chicken" in order to stay in business. However, the image is doctored. The original photo shows a KFC restaurant in western Russia, which has not changed its name, a spokesperson told AFP on May 26, 2022.

The image appears to show a fast-food restaurant counter with a sign reading "Siberian Fried Chicken" alongside a portrait of Soviet leader Joseph Stalin.

KFC's parent company Yum Brands joined a string of brands, including McDonald's, Coca-Cola and Starbucks, that have bowed to public pressure to suspend operations in Russia over Moscow's invasion of Ukraine.

Yum Brands said it would halt operations of company-owned KFC restaurants in Russia.

Most of its 1,000 or so KFC restaurants are independently operated.

Moscow responded by threatening to arrest officials of foreign companies who have criticised the government or to seize assets, including intellectual property. 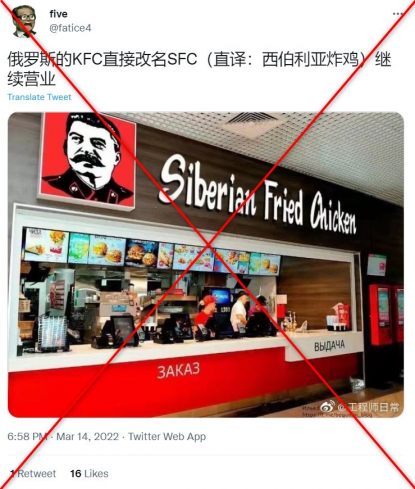 A screenshot of the doctored photo shared on Twitter, taken on May 25, 2022

The image appears to originate from a Russian-language Telegram post, and was subsequently shared in Twitter, Facebook, Weibo and Baidu posts claiming it showed a genuine restaurant.

Some social media users appeared to believe the image showed a genuine KFC restaurant that changes its name following Yum Brands's suspension of operations in Russia.

"This seems to have been done by some Chinese investors," another speculated.

However, the photo has been altered.

The statement, dated July 17, 2018, is about a KFC restaurant opening at a Maxi shopping mall in Tula, western Russia.

The photo shows KFC staff with the same clothes standing in the same position as the picture in misleading posts. The menu items displayed on screens behind them are also the same.

However, the KFC logo and image of the company's founder Colonel Sanders have been replaced by text reading 'Siberian Fried Chicken' and Stalin's image.

A screenshot comparison of the doctored image (L) and the original photo (R), with corresponding features marked out by AFP

Maxi representative Yuri Krestinichev told AFP that "no changes" had been made to the KFC branding in the shopping mall.

A photo provided by Maxi, taken on May 26, 2022, shows the KFC logo and Colonel Sanders's image on the storefront. 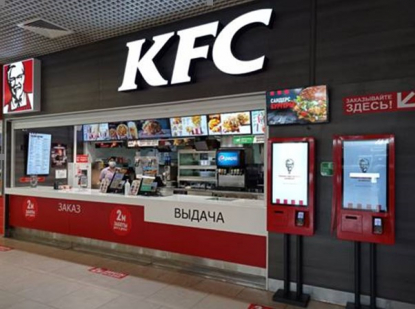 A photo provided by Maxi shows KFC branding on the storefront on May 26, 2022

Yum Brands has made no announcement that it will rebrand its restaurants in Russia to Siberian Fried Chicken, as of May 31, 2022.