A video has been viewed thousands of times in posts alongside a claim it shows a Muslim mob assaulting a Hindu leader in Bangladesh for not attending a Ramadan dinner. However, the clip has been shared in a misleading context: it has previously circulated in reports about an incident in the north Indian state of Haryana. Local police told AFP that four people were arrested following the Haryana attack, which they said was not related to communal tensions.

The Hindi-language caption translates to English as: "In Bangladesh, a Hindu leader was brutally beaten up by Mohammad Jameel for not attending an Iftar party.

"Wherever Islam has a large number of followers, there is a similar atrocity with [non-Muslims]."

Iftar refers to the evening meal with which Muslims end their daily Ramadan fast. 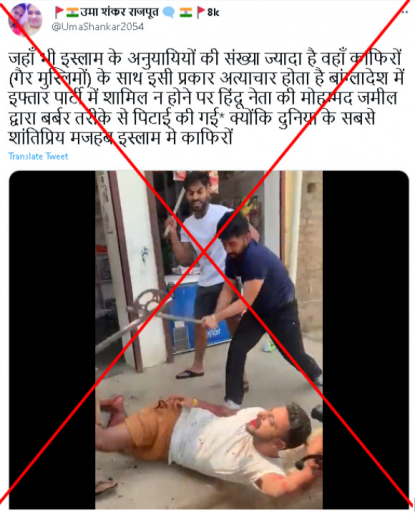 A screenshot of the misleading post captured on May 11, 2022

The video circulated online after Jiten Kanti Guha, a prominent Bangladeshi leader of the minority Hindu community in the country was hospitalised after being beaten by supporters of a local government official on April 29, 2022, according to Bangladesh-based newspaper The Daily Star.

But the footage has been shared in a misleading context.

The video has previously circulated in Indian media reports about an attack in the north Indian state of Haryana.

A reverse image search of the video’s screengrabs, followed by a keyword search, found stills of the clip published in a report by Indian news website The Times of India on May 2, 2022.

Yamunanagar is a city in north Indian state of Haryana.

According to the report, a group of men attacked a truck driver over a monetary dispute.

Below is a screenshot comparison of the video in the misleading posts (left) and the image published in the Times of India report (right): 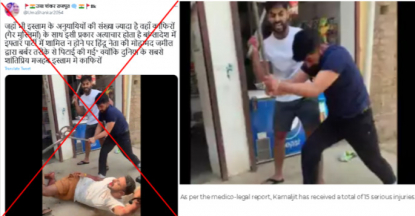 On May 1, 2022, Hindi-language newspapers Amar Ujala and Dainik Jagran included screenshots of the footage in reports about the same incident in Yamunanagar.

"The victim was a Hindu Jat. This was a case of money transaction in which some people had beaten up [the victim] badly, he suffered serious injuries to the hands, legs and also the head.

"He is undergoing treatment. On the basis of [the victim’s] statement and video, some of the accused have been arrested and we are still searching for the other attackers."