Skip to main content
US actress Amber Heard (L) testifies as US actor Johnny Depp looks on during a defamation trial at the Fairfax County Circuit Courthouse in Fairfax, Virginia, on May 5, 2022 ( POOL / AFP / Jim LO SCALZO)

Amber Heard did not quote 'The Talented Mr. Ripley' on stand

Posts shared thousands of times on social media claim actress Amber Heard lifted lines from "The Talented Mr. Ripley" movie during her testimony in the defamation case filed against her by her ex-husband Johnny Depp. But the claims are false; Heard did not use such lines while on the stand, comparisons with the 1999 film's script show.

"Did Amber Heard seriously steal her statement from the movie The Talented Mr Ripley? She's been full of movie quotes during this trial, what a piece of work! #TeamDepp," a May 5, 2022 Facebook post says, sharing a screenshot of what is claimed to be Heard's opening statement in the ongoing court case. 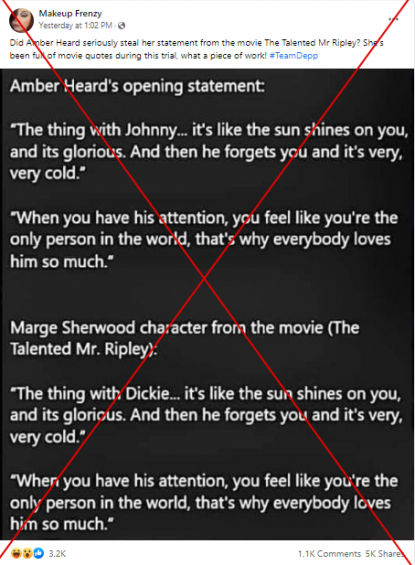 Similar claims circulated across social media, including on Twitter, TikTok and Reddit, as hashtags related to the trial continue to attract billions of views.

Some posts used a collage with the quotes, a photo of the actress on the stand and the poster for the 1999 movie, a thriller starring Gwyneth Paltrow and Matt Damon.

Paltrow's character says: "The thing with Dickie... it's like the sun shines on you, and it's glorious. And then he forgets you and it's very, very cold." After an interruption from Damon's character she says: "When you have his attention, you feel like you're the only person in the world, that's why everybody loves him so much."

Heard is claimed to have said these words, replacing "Dickie" with "Johnny."

AFP Fact Check reviewed the testimony of Heard from May 4 and May 5, 2022, broadcast live and in full on Court TV and Law & Crime Network, and did not find an exact match to the movie script.

In her testimony on May 4, Heard described her relationship with the "Pirates of the Caribbean" star saying: "When I was around Johnny I felt like the most beautiful person in the world. You know, made me feel seen, made me feel like a million dollars."

In response to another question she said: "And then he would disappear, and then there would be just no way to get a hold of him, no way to contact him."

She also recounted multiple instances of alleged physical and sexual abuse by her then-husband.

Depp, a three-time Oscar nominee, denies abusing Heard during a two-year marriage that ended in a 2017 divorce and several lawsuits.

AFP Fact Check has previously debunked a claim about the high-profile trial, here.