A video has been viewed hundreds of thousands of times in posts that claim it shows activists from Pakistan’s main opposition party being arrested by Saudi police. The clip circulated online after Pakistan Prime Minister Shehbaz Sharif was heckled during a visit to the Prophet's Mosque in Medina. However, the video has been shared in a misleading context; it predates Sharif's visit by more than one year. It actually shows Pakistan nationals arrested on suspicion of running digital scams in the Saudi capital Riyadh in April 2021.

The video -- which shows rows of people with their hands tied behind their backs -- was shared on Facebook on April 29, 2022.

The video's Sindhi-language caption translates to English as: "Saudi police have arrested 150 PTI activists at the Prophet's Mosque.

The footage circulated online after local media reported that a delegation of ministers from Pakistan had been insulted while visiting the Prophet's Mosque in Medina on April 28, during Sharif's maiden foreign trip as prime minister.

It was shared on Twitter here by former lawmaker Mussarat Ahmadzeb and was viewed more than 170,000 times after being shared in another tweet here.

Comments on the posts indicated some social media users believed the people shown in the video were arrested after heckling Sharif at the Prophet's Mosque.

"Curse these PTI dogs," one wrote in romanised Urdu.

"There should be a strict punishment for these people disrespecting the Prophet's home," another said.

However, Saudi Arabia's public security agency announced on April 29 that five people had been arrested over the incident -- contrary to the claims in the misleading posts that 150 PTI activists had been arrested.

A reverse image search found the same video in this report by the Saudi media outlet Almowaten published on April 14, 2021.

The report's Arabic-language headline translates as: "24 Pakistanis arrested for stealing more than 35 million riyals in fraud in Riyadh".

Below are screenshots comparing scenes from the misleading post (left) and the video from Almowaten (right): 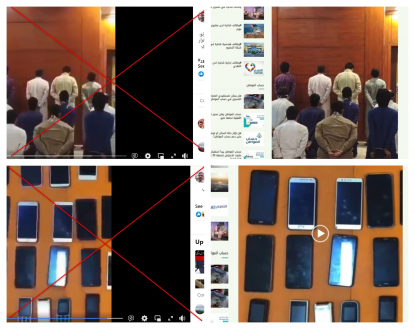 A screenshot comparison of the video in the misleading post (left) and the video from Almowaten (right).

Saudi's public security agency also tweeted about the incident on April 14, 2021 using an image that corresponds to what can be seen in the video.

According to a report in the Dubai-based English newspaper Gulf News, Saudi police arrested 24 Pakistani men for running a string of digital scams in Riyadh that allegedly defrauded their victims out of 35 million riyals (approximately US$9.33 million).

"The suspects, in their 30s and 40s, targeted citizens and residents by sending text messages that included fake notices, such as winning financial prizes, or messages requesting them to update their bank accounts," the report said.