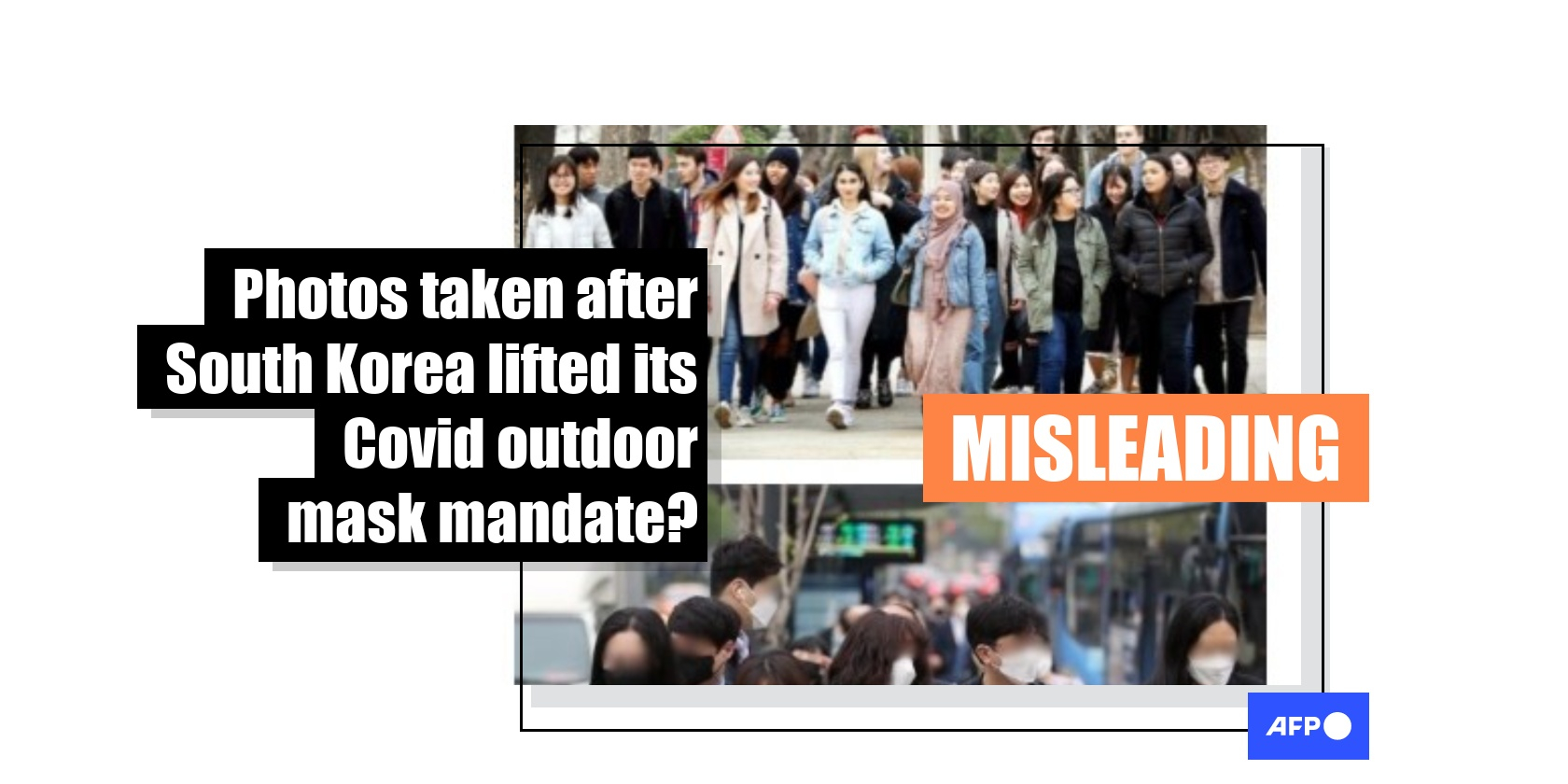 Two images have circulated online in South Korea alongside a claim they show foreign students not wearing face masks while local students kept theirs on after the government lifted its outdoor mask mandate. While a poll found majority of South Koreans still prefer masking outdoors, the photos were shared in a misleading context. The first image of a group of maskless foreign students predates the Covid pandemic, while the second photo circulated in news reports weeks before South Korea's outdoor mask mandate was eased.

"Scenes from a university campus following the lifting of the mask mandate today," reads an online post featuring the photos, published by the South Korean tabloid Pullbbang on May 2.

"Foreign students are all walking around maskless as if they were waiting for this moment, but South Koreans continue to wear masks as if they are embarrassed about showing their faces after two years," the post adds.

From May 2, residents of South Korea were no longer required to wear face masks when outdoors.

However, a poll released on the same day found 56.8 percent of South Koreans said they would continue masking.

The identical photos were shared alongside a similar claim on Facebook here, here, here and here.

The image that shows the group of people without face masks was published by South Korean daily The Hankyoreh on March 30, 2019 -- nine months before the coronavirus was first detected.

The caption of the photo reads in part: "Around 20 foreign students from Sejong University who agreed to be part of The Hankyoreh's photo report gathered on the 27th. They are walking confidently while chatting in broken Korean, as well as French, English, Chinese, Malay and other languages."

Below is a screenshot comparison between the photo shared in the misleading post (left) and the photo published by The Hankyoreh (right):

Screenshot comparison of the photo shared on the misleading social media post (left) and the original photo published by The Hankyoreh (right).

The same photo and news article was also shared in a blog post on Daum Blog, a South Korean social media website, on March 30, 2019.

It corresponds to a photo published by News1, a South Korean news agency, in a report from April 21, 2022.

The caption of the photo reads: "Citizens donning masks are going to work at the Gwanghwamun crossroads in Jongno District, Seoul. 2022.4.18/News1."

Below is a screenshot comparison between the second photo in the misleading social media post (left) and the photo published by News1 (right):

The image was earlier published on April 18, 2022 by the South Korean daily Segye Ilbo, crediting News1.