Following a revamp of the Indian capital's alcohol sales policy, a picture was shared online that appeared to show Delhi Chief Minister Arvind Kejriwal from the opposition Aam Aadmi Party indulging in a boozy meal with a fellow politician. However, the image has been doctored. The original photo shows the men dining without alcohol.

"Alcohol is necessary. Punjab on a high along with drunk Delhi," reads a Hindi-language Facebook post shared on April 10, 2022.

The picture appears to show Punjab Chief Minister Bhagwant Mann (left) and Delhi Chief Minister Arvind Kejriwal (centre) sitting next to a third man with drinks, plates of chicken and a liquor bottle in front of them.

'Drunk Delhi' appears to refer to an overhaul of the Indian capital's alcohol sales policy in November 2021 that shut down hundreds of government-run liquor shops and handed alcohol sales exclusively to privately operated walk-in stores.

Local media reported here and here on protests against this new policy, with opponents alleging the Delhi government had allowed liquor shops to set up near schools and places of worship and long queues were causing a public nuisance. 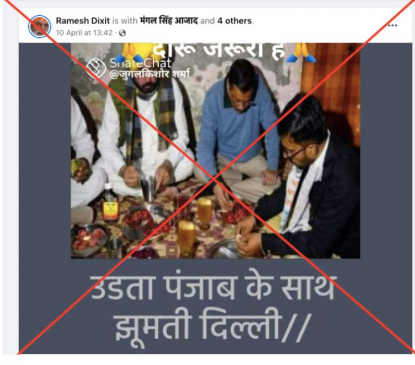 A screenshot of the doctored photo shared on Facebook, taken on April 25, 2022.

Some social media users appeared to believe the posts showed a genuine photo.

"With leaders like this, the country is heading for destruction," another wrote.

A reverse image search found the original photo posted on Twitter by the opposition Aam Aadmi Party, which both Mann and Kejriwal represent.

The original photo shows no liquor bottle or glasses filled with coloured liquid. In addition, the men's plates are filled with Indian roti (flatbread) and dal (pulses), not chicken.

"On the invitation of an auto driver from Punjab, Arvind Kejriwal sat in his auto-rickshaw and went to his house to have food," reads the Hindi-language tweet from November 22, 2021.

Below is a screenshot comparison of the doctored image (left) and the photo the Aam Aadmi Party posted on Twitter (right).

A screenshot comparison of the doctored image (left) and the photo on Twitter (right).

The Times of India’s Chandigarh bureau also posted a video of the dinner on Twitter on November 22, 2021.

#Punjab: #AamAadmiParty (AAP) national convener and #Delhi chief minister #ArvindKejriwal having dinner at the house of an auto-rickshaw driver in #Ludhiana. pic.twitter.com/ekE3SAQMvG