Video shows rendition of Hindu temple being built in UAE, not Saudi Arabia 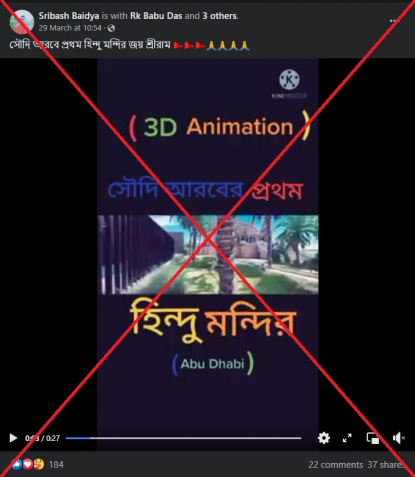 The same clip was shared here and here on Facebook alongside a similar claim.

Bengali is the official language of Muslim-majority Bangladesh, and is spoken widely in neighbouring Indian states.

The clip has been shared in a misleading context.

The 30-minute, five-second video was posted on BAPS' verified YouTube channel on April 23, 2019.

The clip seen in the misleading posts starts from the original video's 17-minute, 51-second mark.

Below is a screenshot comparison of the clip in the misleading posts (L) and the YouTube video (R):

A spokesperson from the BAPS temple authority told AFP: “This video is the architecture rendition of the BAPS Hindu Mandir (temple) in Abu Dhabi. It is the first traditional stone-made Hindu temple in Abu Dhabi.”

Gulf News published a photographic report on the progress of the temple's construction on November 20, 2020.

The construction is expected to be completed by the first quarter of 2024, according to the spokesperson.