A picture has been shared hundreds of times on Facebook alongside a claim that it shows Indonesian President Joko Widodo visiting an activist in hospital after he was attacked at a protest in Jakarta in April 2022. But this is false: the picture has been doctored and it actually shows the president visiting his predecessor, Susilo Bambang Yudhoyono, who was hospitalised in 2018.

The Indonesian language caption reads: "Best buzzer,..  Visited by the head of state."

And the text superimposed on the picture reads: "New Update...!!! Public Outcry // This Is a Surprise Jokowi and Ma'ruf Visits Ade Armando". 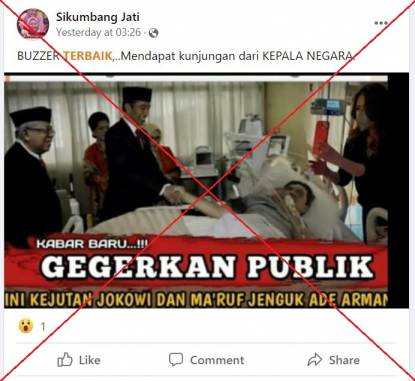 "Buzzer" is a popular term in Indonesia used to describe individuals or accounts that have the ability to amplify messages with certain motives that are usually related to politics.

Ade, an activist and lecturer at the University of Indonesia, was attacked by protesters when he showed up at a student rally outside parliament in Jakarta on April 11, 2022.

The mob accused him of being a pro-government "buzzer", or someone who amplifies the government's views or messages on social media.

The rally was part of a series of protests across the country to oppose politicians' support for extending the presidential term limit, which is currently mandated at two terms by the constitution.

Some Facebook users appeared to believe the picture is real with comments on the image such as: "His boss shows up" and "he is indeed their pet."

The same picture has been shared more than 200 times after it was posted alongside a similar claim on Facebook here, here, here and here.

It also appeared as a thumbnail of a YouTube video, which was posted with a similar claim on April 15, 2022.

However, the picture has been digitally edited.

A combination of reverse image and keyword searches on Google found that the original picture of Jokowi was published by state news agency Antara on July 19, 2018.

Kalla served as vice president during Jokowi's first term in office, from 2014 to 2019.

Below is a screenshot of the photo on Antara's website: 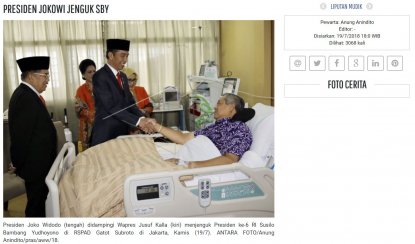 Screenshot of the photo published by Antara

The photo of Jokowi visiting Yudhoyono was also published by other media outlets such as CNN Indonesia and VIVA.

In the edited picture, the face of Kalla has been replaced with that of Ma'ruf, the current Indonesian vice president.

The photo of Ma'ruf corresponds with this photo published on the website of Indonesia's Cabinet Secretariat on October 21, 2019. 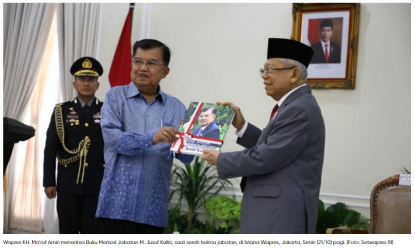 Screenshot of the picture on the Cabinet Secretariat website

The event was also reported by local newspaper Kompas here on the same day.

The picture showing Ade lying in a hospital bed was published in a report by Indonesian news outlet Suara.com on April 12, 2022.

The image of Ade in the misleading picture has been mirrored and rotated.

The photo's caption reads: "University of Indonesia rector Ari Kuncoro visits Ade Armando, who suffered beating in front of the parliament building during the April 11 protest, on Tuesday, April 12, 2022. Ade is currently being treated at Siloam Semanggi Hospital." 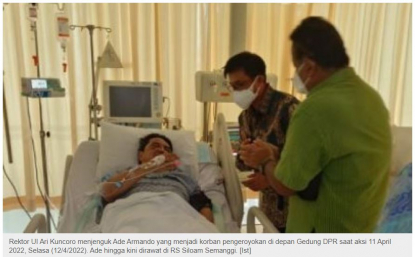 Screenshot of the Suara.com report

The picture also appeared in local news reports about the rector's hospital visit, such as here and here.

The original picture of a woman standing next to Ade's bed was posted here on the Twitter account of Indonesian Solidarity Party spokesman Sigit Widodo on April 12, 2022.

It shows the woman was actually standing next to Ade's bed along with two other men.

The tweet reads: "This morning he [Ade] also said that he was getting better. It's quite a relief even though we know that, apart from being battered, Ade also suffered an internal head injury and a concussion that required doctors to monitor him every two hours. 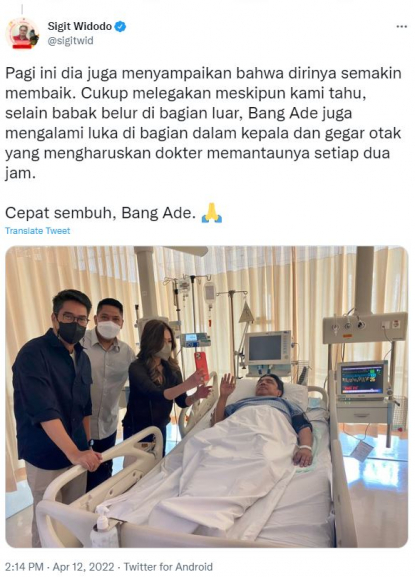 Below is a screenshot comparison between the picture in the misleading post (centre) and the genuine pictures (top, bottom), with the prominent features marked by AFP. 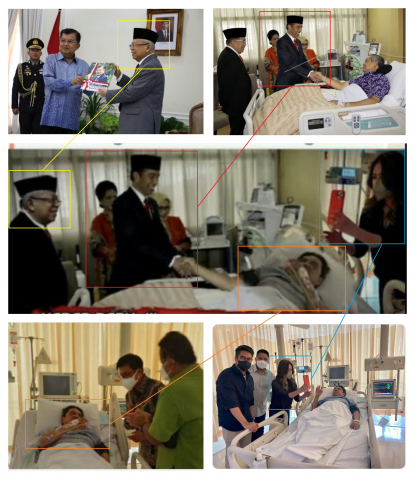 Screenshot comparison between the picture in the misleading post (centre) and the genuine pictures (top, bottom)