A video of angry crowds throwing projectiles in the street has been viewed more than one million times in Facebook and YouTube posts that claim it shows Muslims disrupting Hindu new year celebrations in Rajasthan, India in April 2022. While there were genuine reports of attacks on Hindus taking part in a new year parade in the state, the footage has actually circulated online since 2016 in reports about religious clashes in Punjab.

"This video is from the Karauli district of Rajasthan, where some Hindus were going out on a procession to celebrate Hindu new year and were stopped from proceeding by a particular community," reads a Hindi-language Facebook post shared on April 4.

The phrase 'a particular community' is a common reference to India's 200-million-strong Muslim minority, who have complained of a surge in discrimination since Prime Minister Narendra Modi's Hindu nationalist Bharatiya Janata Party (BJP) came to power in 2014.

The post surfaced after Hindus taking part in a new year procession were reportedly pelted with stones by locals in a Muslim neighbourhood in Karauli in Rajastan on April 2. 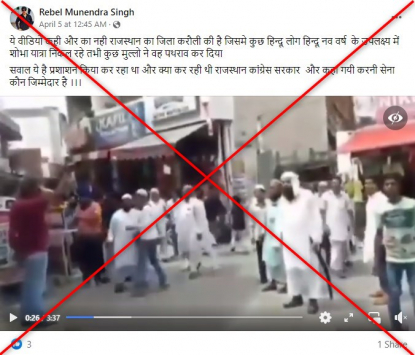 However, the footage was filmed years before the clashes in Karauli  in April 2022.

A Google keyword search found the clip in a longer video posted on YouTube on July 13, 2017.

Shiv Sena is a right-wing Hindu nationalist party, while Phagwara is a city in Punjab.

Below is a screenshot comparison of the video in misleading posts (left) and the YouTube video from 2017 (right).

The 44-second mark of the video in misleading posts corresponds to a photo in a report from July 23, 2016 by the Indian Express newspaper about the same clashes.

"Coming face-to-face during their protest marches, Shiv Sena leaders and Muslims clashed with each other at Phagwara on Friday. No casualties were reported as the police managed to control the situation," the Indian Express reported.

Below is a screenshot comparison of the video (left) and the photo in the Indian Express report (right). 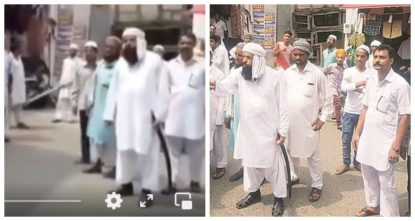 At the 01:13 mark of the video, a shop sign reading "Nikhil Collection" is visible.

The frame corresponds to an image of a clothing shop signboard in Phagwara, Punjab posted on Google Maps.