Two photos have been shared in a report that links them to a fire at a Ukrainian nuclear power plant following a Russian attack in March 2022. However, the images -- viewed thousands of times -- have been shared in a misleading context. Both photos predate the Russian attack: one image has circulated in reports since 2011 about an oil refinery fire in Japan, while the other has circulated in reports since January 2022 about a Russian military drill.

The images were shared here on Facebook on March 4, 2022.

The first appears to show a fire at a factory complex, while the second shows two soldiers standing in front of a blaze.

The Korean-language caption translates as: "A fire broke out at a nuclear power plant in Ukraine, which once suffered the Chernobyl disaster nightmare."

This is a reference to the 1986 Chernobyl disaster, also in Ukraine, which left hundreds dead and spread radioactive contamination west across Europe. 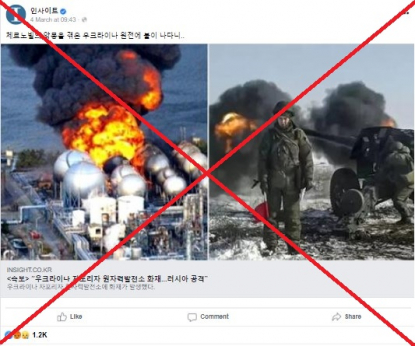 The photos appear as a thumbnail for the link to a news report published by South Korean online tabloid Insight on March 4, 2022.

The Zaporizhzhia nuclear power plant in southeastern Ukraine is the largest in Europe.

The posts circulated online after Russian forces seized control of the plant on March 4, 2022, following fighting between invasion forces pushing towards the city of Zaporizhzhia and Ukrainian defenders.

The clash caused a blaze at the plan, triggering global alarm.

Ukrainian authorities said the fire had been put out and no radiation leak was detected. AFP reported on the developments here.

The link to the tabloid news report with the same thumbnail images was also shared on Facebook here, here and here.

The second photo of the two soldiers was also published alongside Insight's report about the fire at the Zaporizhzhia power plant. The Korean-language caption reads: "Russian soldiers take part in training in Russia's Rostov region."

However, the photos have been shared in a misleading context; keyword and reverse image searches found both predate the attack on the Zaporizhzhia power plant.

The first photo of a burning factory complex has circulated online as early as 2011 in reports about the Tohoku Earthquake in Japan.

The headline reads: "An oil refinery is on fire following the Tohoku Earthquake in Chiba city, Chiba prefecture, Japan, 11 March, 2011."

Below is a screenshot comparison of the photo in the misleading Facebook post (left) and the photo published by Sofia News Agency (right):

The photo is credited to the European Pressphoto Agency and can be seen on the agency's website here:

Screenshot of the photo as seen on the European Pressphoto Agency website, taken on March 28, 2022.

Other images of the oil refinery are also shown on the agency's website:

The photos are captioned: "An oil refinery is on fire following the Tohoku Earthquake in Chiba city, Chiba prefecture, Japan, 11 March, 2011.

"A magnitude of 8.8 earthquake hit northern Japan earlier in the day."

The second image with two men in military uniform in front of two columns of smoke and fire corresponds to a photo published by The Associated Press on January 28, 2022.

The caption reads: "In this photo taken from video provided by the Russian Defense Ministry Press Service on Friday, Jan. 28, 2022, Russian troops fire howitzers during drills in the Rostov region during a military exercising at a training ground in Rostov region, Russia."

Below is a screenshot comparison of the photo used alongside the tabloid report (L) and the photo published by AP (R):