Posts mislead on US energy independence

Social media posts claim President Joe Biden's policies are undermining US energy independence, arguing that the White House is making America reliant on oil from abroad. This is misleading; the United States became a net exporter of oil and refined products in 2020 but still imports millions of barrels per day, and global market conditions will affect the country no matter how much crude it produces domestically.

"On his first day in office, Joe Biden declared war on American energy independence. We cannot be reliant on foreign oil. We must produce our own energy," says a March 23, 2022 Facebook post. 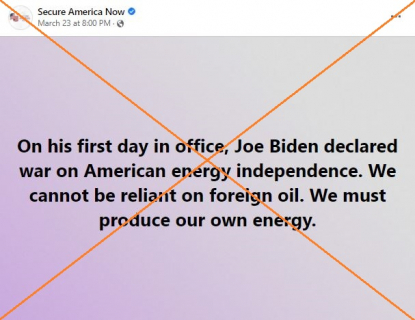 An Instagram post linked the idea of energy independence to the war in Ukraine, saying US self-reliance would help defeat Russia's President Vladimir Putin, whose forces invaded in late February. Claims that Biden destroyed US energy independence also appeared on Facebook and Twitter as American consumers face price shocks stemming from surging energy costs and other economic conditions, chiefly inflation.

But the posts simplistically misrepresent the nature of the oil market, where crude and refined products are bought and sold by global traders to meet short-term needs around the US and the world.

The US became a "net annual petroleum exporter" in 2020, according to official government data, which some commentators touted as energy independence. But supply is not a one-sided metric; data from the US Energy Information Administration (EIA) shows that American exports that year amounted to about 8.51 million barrels per day (bpd), while imports were still about 7.86 million bpd.

The same report said the US produced about 18.4 million bpd of petroleum -- a figure that includes crude oil and a variety of refined products such as ethanol, biodiesel and gas liquids -- and consumed about 18.12 million. Transportation and processing costs mean it is often cheaper to buy oil for the US West and East Coasts from Asia and Europe respectively, shunning domestic supply.

The US remained a net petroleum exporter in 2021, although trends showed a move toward growing imports.

Mark Finley, fellow in energy and global oil at Rice University's Baker Institute and a former senior economist at BP, said logistical factors mean the US will continue to import oil even if the country produces more than it consumes.

"The oil and refineries aren't always where the demand is, and it's hard to move supplies thousands of miles across the continent," Finley said, adding that it can be more economical to bring oil products to the East Coast from Europe and to the West Coast from Asia that from locations in the central part of the United States.

He noted that New England imports liquefied natural gas because there is no easy way to transport gas from locations in the US, even as close as Pennsylvania. But the country "does export large quantities of natural gas, mostly from the Gulf" of Mexico, Finley said.

Additionally, Finley said some US refineries are not equipped to deal with certain grades of crude oil.

"The refineries in much of the country were built to process low-quality imported crude oil, and the quality of the oil in the shale revolution isn't a good match for them," he said.

The shale revolution refers to the growth in production from new techniques including hydraulic fracturing -- also known as fracking -- to extract oil from tight underground formations.

Antoine Halff, a researcher at Columbia University's  Center on Global Energy Policy and chief analyst at Kayrros, a climate and energy data analytics company, said the notion of "energy independence" has little meaning in a globally interconnected world.

"I can't think of any country that’s energy independent," Halff said.  "You can be net positive or net neutral in terms of exports of energy but that doesn’t mean being able to function efficiently in isolation."

Halff pointed to the "mismatch" of production in some parts of the US, which are far from urban consumption centers on the country's coasts.

He noted that shipping oil products from the Gulf of Mexico to other US ports is often more costly than imports because of the so-called Jones Act, which requires that vessels be US-owned and operated.

"That makes it more expensive to ship oil from the Gulf of Mexico" to the East and West Coast, Halff said. "As a result, excess production from the Gulf goes to Latin America."

The Keystone XL pipeline project, which Biden canceled on his first day in office, would have delivered more Canadian oil to US refineries, with much of  the refined products likely to be exported. By adding to both imports and exports, this project "would be a wash for the trade deficit," Finley said.

The proposed pipeline completion would have swapped some crude oil imports with Canadian imports without impacting the overall trade picture, according to Finley: "It would displace other forms of crude oil from Mexico or possibly Venezuela and wouldn't change the domestic balance."

Halff said the pipeline project  -- which was planned to enter into service in 2023 -- could have been used to boost supplies of Canadian crude to refineries in the central US, and thus increase availability of some refined products.

But he said this still might have little impact on the supply situation for the East and West Coasts because of logistical constraints, and would be unlikely to impact overall energy prices which are based on a global marketplace.

"One point people don’t get is that even if you increase domestic supply you're exposed to the global market," Halff said, adding: "It's one big market; your prices are not set domestically, they're set internationally."