As South Korea recorded a surge in Covid-19 cases fuelled by the highly transmissible Omicron variant, a video circulated alongside a Korean-language claim that it shows a triple-jabbed doctor collapsing while performing surgery in Australia. However, the video -- which has been viewed hundreds of times -- has been shared in a false context. It has previously circulated in news reports about an incident in China since January 2020, when Covid-19 vaccines were not yet available.

"Australia -- Doctor who received a third [Covid vaccination] collapsed during surgery. He is in danger. The patient is in danger. How did it come to this?" reads the Korean-language post shared on Facebook here on March 19, 2022.

The 10-second video shows what appears to be a surgeon collapsing in an operating theatre. 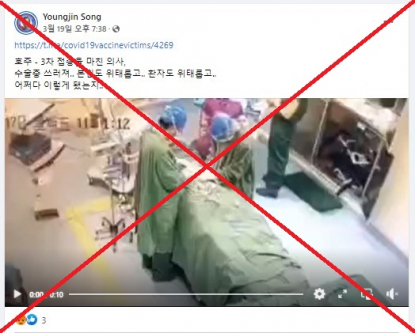 A screenshot of the misleading claim shared on Facebook, captured on March 21, 2022.

The same video was shared alongside a similar claim on Facebook here, here and here; and on Twitter here.

South Korea has been battling an Omicron-fuelled wave of Covid-19 infections, with record numbers of infections recorded. Despite the surge, death rates have remained relatively low in the country, where the vast majority of the country's eligible population has been fully vaccinated and boosted.

However, false claims about the safety of Covid-19 vaccines have frequently been circulated in the country. AFP has debunked some of those claims here and here.

The claim that this video shows a vaccinated doctor collapsing mid-surgery is false; it has been shared in news reports since January 2020, before any Covid-19 vaccines were available.

A reverse image search on Baidu showed a screenshot from the video was used in a January 17, 2020 report from The Beijing News, a Chinese government-run daily.

According to the report, the video is of a doctor who fainted during surgery at the Zhenxiong People's Hospital, in China's Yunnan province.

The simplified Chinese-language report translates in part as: "The Beijing News reporter learned from the hospital that the doctor fainted mainly because of hypoglycemia and fatigue, after working for many hours. He was fine after receiving treatment."

The report does not mention Covid-19 or vaccines.

The first Covid-19 cases were recorded in central China in December 2019, and the country started the first phase of a clinical trial for a coronavirus vaccine in March 2020 -- two months after the video first circulated on social media.

The country's State Council approved a proposal for experimental use of coronavirus vaccines in June 2020, according to a South China Morning Post report published in September 2020.

Below is a screenshot comparison between the video shared on Facebook (left) and the image used in the report from The Beijing News (right):

The Chinese-language text seen in the top-left corner of the video shared on Facebook reads "17th Friday 11:11:13".

A report on the incident and the public's reaction was published here by Spring City Evening News, a government-controlled newspaper in Yunnan province, on January 19, 2020.

The same video was posted on Weibo by Guangdong Radio and Television on January 18, 2020 and on Duoyin by the Yunnan Communist Youth League on January 19, 2020.

Neither the report nor the posts mention Covid-19 or vaccines.

AFP has repeatedly debunked misleading claims circulating about Covid-19 and the safety of coronavirus vaccines here.