Video shows Putin's dog barking at Japanese journalists in 2016, not 2022

A video has been viewed hundreds of thousands of times in Facebook posts that claim it shows Russian President Vladimir Putin trying to embarrass a "Japanese delegation" by bringing his dog to an official meeting. The posts -- which circulated online after Russia's invasion of Ukraine -- refer to Japan's alignment with the United States and other countries, which have imposed sanctions on Moscow. But the video has been shared in a false context. It shows Putin bringing his dog to an interview with Japanese journalists at the Kremlin in 2016.

The three-minute 42-second clip shows Putin entering a room at the Kremlin with a dog, which then begins barking loudly.

Two Japanese men dressed in suits can be seen watching on awkwardly, while a camera crew films the scene.

The lengthy Urdu-language caption translates to English in part as: "Russian President Putin -- through his body language and the style of diplomacy along with his dog -- has given a clear message to the Japanese delegation that Japan is just a trained dog of the United States which is feeding on America’s crumbs.

"This is a message not only to Japan but to all the countries in the world who are presently standing with the United States.

"The signs of embarrassment can be clearly seen on the faces of the Japanese delegation." 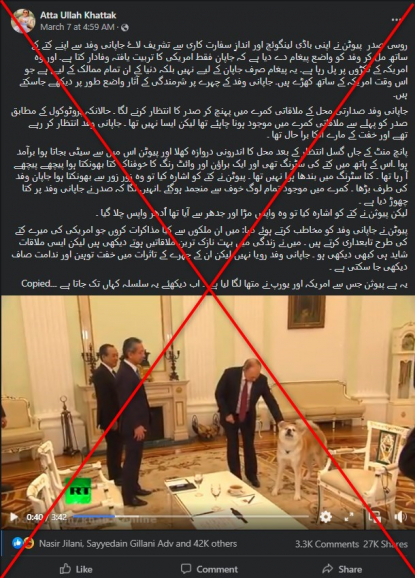 The same video has been viewed more than 31,000 times after it was shared with a similar claim on Facebook here, here and here.

The posts were shared online in Pakistan, where Prime Minister Imran Khan has been attempting a balancing act in relations with the world's superpowers -- particularly as Islamabad's value to the United States has slipped following the withdrawal of foreign forces from neighbouring Afghanistan.

In early March, ambassadors of European Union nations to Pakistan appealed for Islamabad to support an emergency resolution condemning the Russian invasion of Ukraine after the country abstained from an earlier vote on the crisis, AFP reported.

Keyword searches found identical scenes in this full video published on the Kremlin's website on December 13, 2016.

The same scenes also appeared in this shorter video published on the YouTube channel of France-based media outlet Euronews on December 15, 2016.

The description of the Euronews video reads in part: "Ahead of his visit to Japan later this week, Russian President Vladimir Putin brought his dog Yume into an interview with Japanese journalists, and the large Akita breed made sure she as well as her master were well heard.

"Putin gave an interview to Nippon Television and Yomiuri Shimbun newspaper in Moscow on Tuesday, accompanied at first by Yume, who was given to him by Japan's Akita Prefecture in 2012.".

Below is a screenshot comparison of the video in the misleading posts (L) and the original video on the Kremlin's website (R):