Skip to main content
A woman carries her cat as she walks near Kyiv-Pasazhyrskyi railway station in Kyiv on February 24, 2022 ( AFP / Daniel Leal)

Ukraine's army is not using cats to spot Russian snipers

A tweet spread as a screenshot online says the Ukrainian army is using cats to locate Russian snipers via lasers attached to their rifles. But there is no evidence to corroborate the claim, a military expert dismissed it as "complete garbage," and the author of the post acknowledged it was intended as a joke.

"#Ukraine army cats are trained to spot and direct the location of #Russiansniper laser dots. This is Mikael 'The panther of Kharkiv' who single handed exposed the location of 4 Snipers which ended in their deaths," says a February 27, 2022 tweet posted just days after Russia invaded Ukraine that features an image of a camouflage-uniformed soldier holding a cat. 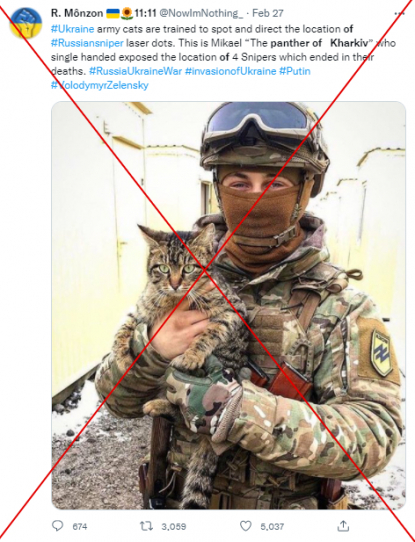 Militaries have weaponized animals throughout history , and the CIA even sought to use a cat to eavesdrop on the Russians in the 1960s.

However, the person who posted the claim about sniper-hunting felines in Ukraine repeatedly said it was not true, though they did follow it up with a March 9 tweet claiming to show "Mikael in a counter sniper operation 20 miles east of #Kharkiv."

The original claim nonetheless spread across Facebook, Instagram and Reddit, as well as on Twitter. But the photo of the soldier with the cat used to illustrate it has circulated on Twitter as far back as 2018, and the second image of "Mikael" is a cat meme.

Liam Collins, a former director of the Modern War Institute at West Point who served as defense advisor to Ukraine from 2016-2018, described the claim as "complete garbage."

"I can't imagine a cat being trained to follow troops around and wait for lasers," he told AFP.

"A true sniper is not going to give their position away," Collins said, adding: "I guess it is possible that someone would have a visible pointer on their rifle, but I just can't imagine why anyone would do that. And then what is the cat going to do? Run around the room chasing the laser like a toy? How is that helpful to the soldier?"

Prior to Russia's invasion, Ukrainian soldiers told AFP they had found solace in the companionship of stray dogs and cats.

AFP Fact Check has debunked other inaccurate claims about the Ukraine conflict here.