A photo of Ukrainian President Volodymyr Zelensky is circulating in Facebook posts that claim it shows him sharing a meal with soldiers resisting Russia's invasion. The posts are misleading; the photo was taken when Zelensky visited eastern Ukraine on February 17, 2022, days before Russia launched a military operation in the country.

"Ukrainian president takes meals together with his allies in the battlefield," reads a Sinhala-language Facebook post shared on March 1. 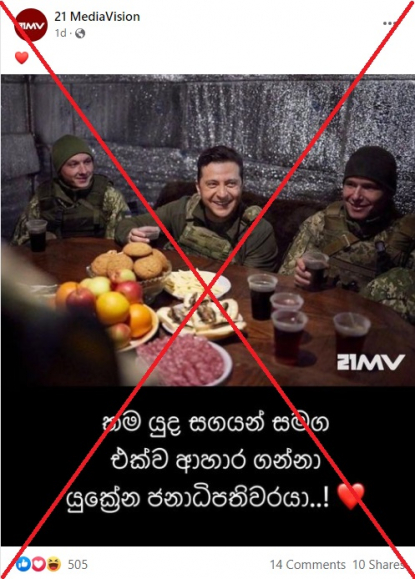 The photo was shared in similar Facebook posts here, here, here and here.

Some social media users appeared to believe the photo was taken during the deadly conflict sparked after Russia invaded Ukraine on February 24.

"It's fascinating to see he has time to enjoy meals while seated at a table, despite the heavy fighting," one person commented.

"He is a grade A actor. Does he really want people to think the soldiers have time to enjoy meals like this during a war? These are all photo opportunities," another wrote.

Reverse image searches found the photo published in an article by The Associated Press news agency on February 17.

The photo is one of several in a slideshow about growing tensions in the Donetsk region prior to the Russian invasion.

According to the photo's caption, it was taken during Zelensky's visit to the separatist region on February 17 -- one week before the Russian invasion.

It adds that he met "service members of the country's armed forces at combat positions". 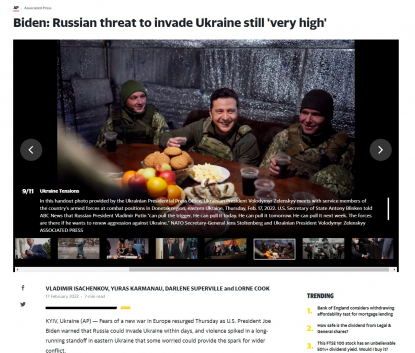 Screenshot of the AP article captured on March 1, 2022

Below is a screenshot comparison between the image in the post (left) and the photograph in the AP article (right):

The image is also available on stock image site Shutterstock with the identical caption and date stamp.

There have no been reliable reports of Zelensky fighting alongside Ukrainian soldiers since the Russian invasion, as of March 7.

AFP has debunked a wave of misleading claims about the Ukraine conflict.