This video shows an explosion in Beirut in 2020, not Russian strikes on Ukraine in 2022

After Russian President Vladimir Putin launched a full-scale invasion of Ukraine, dramatic footage of a huge explosion was viewed tens of thousands of times in social media posts that claimed it shows buildings destroyed by Russian air strikes. In fact, the video shows a deadly blast that ripped through the Lebanese capital Beirut in August 2020.

It shows smoke rising from buildings in the distance before a sudden blast produces a massive orange fireball in the sky.

"Live broadcast of the battle in Kyiv, the capital of Ukraine," reads the post's simplified Chinese-language caption. 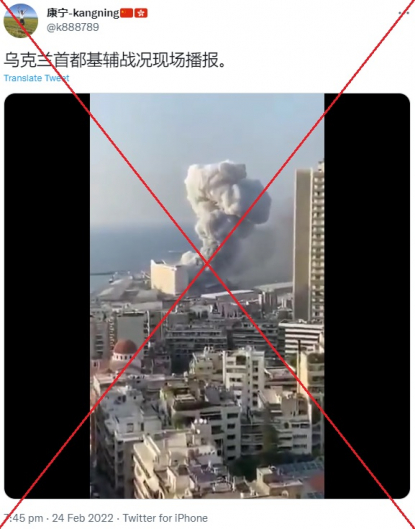 Screenshot of a tweet sharing the false claim, taken on February 24, 2022

Russian missiles and shelling rained down on Ukrainian cities on February 24 after President Vladimir Putain unleashed a full-scale ground invasion and air assault, forcing civilians to shelter and displacing 100,000 people.

Invading Russian forces later pressed deep into Ukraine as deadly battles reached the outskirts of Kyiv and the West responded with punishing sanctions.

The video was viewed more than 30,000 times in similar tweets here, here, and here.

However, the footage has been shared in a false context. It actually shows the cataclysmic Beirut port blast in 2020.

Below are screenshot comparisons of the video shared in false posts (left) and CBS's video (right): The same location can be seen here on Google Maps:

The footage was published in news reports about the explosions in Beirut by various broadcasters, including by UK newspaper The Guardian, which credited the footage to Sondoss al-Asaad.

Following the explosions, AFP published footage of smoke billowing above buildings in the same location here.