Skip to main content
A man walks a dog past vehicles blocking a road during a protest by truck drivers over pandemic health rules outside the parliament of Canada in Ottawa on February 15, 2022 ( AFP / Ed Jones)

Pets of jailed Ottawa protesters are not facing euthanasia

Social media posts and online articles claim Canada's capital authorized the euthanasia of pets owned by protesters arrested for participating in a weeks-long anti-vaccine mandate demonstration. This is false; a longstanding city law allows authorities to recover pets when owners cannot look after them, they become eligible for adoption after eight days, and the clearing of the Ottawa protest did not lead to animals being put down.

"SHOCK POLICY: Ottawa has given itself the authority to euthanize the pets of truckers if Trudeau imprisons them for more than 8 days," says a February 17, 2022 tweet from Keean Bexte, linking to an article he wrote on the topic. 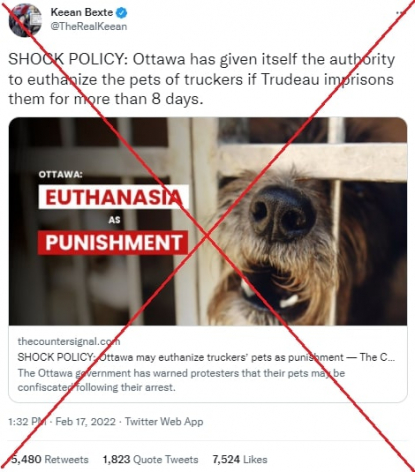 Outlets including UK website Express and the US broadcaster Fox News made similar claims, which spread as Canadian police removed protesters from central Ottawa in February 2022 after weeks of demonstrations against Covid-19 vaccine mandates.

The claims were sparked by a February 17 tweet from the Ottawa By-law and Regulatory Services, a municipal law enforcement agency independent of city police, which oversees animal care and control in the city.

Roger Chapman, director of Ottawa By-law and Regulatory Services, told AFP on February 23 that the city's Animal Care and Control By-law "provides by-law enforcement officers the ability to take into protective care animals whose owners cannot care for them as a result of incarceration, fire, medical emergency or eviction."

The by-law was enacted by the Ottawa City Council in 2003, and last updated in 2016. It was not created for the specific purpose of the anti-mandate protest.

Chapman said: "Within eight days of the animal being placed into protective care, the owner or person acting on their behalf needs to arrange to have the animal picked up or extend their stay. In the event contact is not made, the animal would be considered surrendered and will be rehomed."

During the protest, "one dog was placed into protective care because the car it occupied was being towed, and the owner was not present," he added.

This was confirmed by Stephen Smith, a spokesperson for the Ottawa Humane Society (OHS), a non-profit organization that holds a city contract to act as a municipal pound.

"We received one animal as a result of arrests at the protest, and the animal was returned to its owner the same day," Smith said.

OHS policy "acknowledges that humane euthanasia is considered necessary" when an animal is suffering severely or incurably, behaves in a way that is dangerous to the public, or is assessed not suitable for adoption for medical or behavioral reasons.

However the policy also says: "OHS keeps every adoptable animal until the right home is found, regardless of length of stay."

AFP Fact Check has debunked other misinformation about the protest in Ottawa here.