An image of a building has been shared repeatedly in Korean-language Facebook posts alongside a claim it shows a new convention centre set to be built in the South Korean city of Gwangju. The claim circulated soon after the convention centre's president announced plans to expand it. However, the claim is false; the image actually shows the existing convention centre in Gwangju, not the planned new facility. 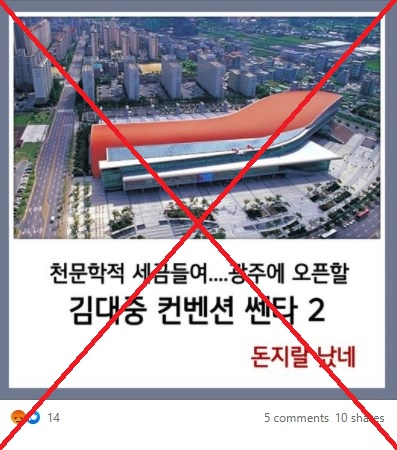 Korean-language text superimposed on the image translates to English as: "The image of the new Kimdaejung Convention Center in the city of Gwangju, which will require astronomical funds to build. What a waste of money".

Kimdaejung Convention Center is a facility in the South Korean city of Gwangju designed to hold large exhibitions and conferences. The centre was established in 2004, according to its official website.

The centre first laid out its plan in 2018 to build a new facility near the current one, but the project has stalled due to administrative and financial issues, according to Yonhap News Agency.

The image circulated after the centre announced on February 8, 2022 that it would still pursue the project, without providing a proposed timeline.

The same image was shared alongside a similar claim on Facebook here, here and here.

However, the photo shows the existing centre established in 2004, not the planned new facility.

A reverse image search on Google found the original photo published in this report by South Korean daily Oh My News on November 10, 2008.

The photo caption reads: "Photo of Kimdaejung Convention Center where the Korean Society for Railway held a conference".

Below is a screenshot comparison of the image shared in the misleading Facebook post (L) and the original photo published by Oh My News (R). 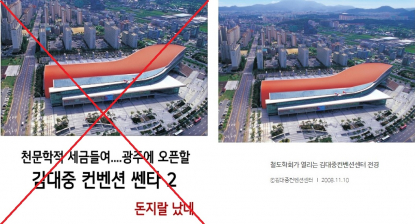 Below is a screenshot comparison of the photo published by Oh My News (L) and a satellite image from Google Maps that shows Kimdaejung Convention Center in 2022 (R), with similarities circled in red by AFP:

The design of the building in both images is the same, and a cluster of corresponding buildings can be seen alongside it.