Video shows Putin's 2015 inauguration of Moscow mosque, built on site of former one


A video has been viewed hundreds of thousands of times in multiple social media posts alongside a claim that it shows Russian President Vladimir Putin inaugurating a mosque that had been converted from a church. The video has circulated among Islamic communities for several years. The claim is false; the video actually shows Putin inaugurating a new mosque in Moscow in 2015. It was built on the same site of a demolished century-old mosque.

The video, showing Russian President Vladimir Putin alongside a Muslim cleric unveiling a plaque, was uploaded on on Facebook here on January 3, 2022.

Part of its caption read: "Russian President Putin and ministers converting Russian Church into Masjid and handing over to the Grand Mufti of Russia." 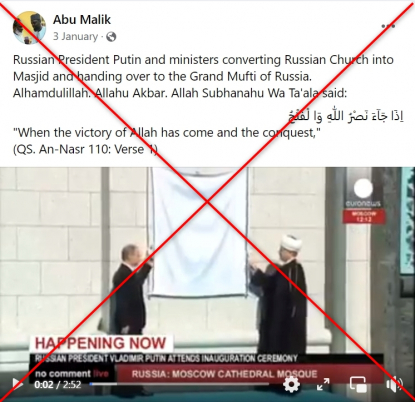 The video has been viewed more than half a million times after it circulated widely alongside a similar claim among social media users in Muslim-majority countries, such as Pakistan, Bangladesh, Saudi Arabia, Indonesia and Malaysia.

A keyword search found the same video posted on Facebook here by Euronews, a France-based European news outlet, on September 23, 2015.

Below is a screenshot comparison of the video in the misleading post (L) and the Euronews footage (R):

The full event was broadcast on Russian state media Ruptly here on the same day.

This Ruptly report of the same event identifies the man who inaugurated the mosque with Putin as the grand mufti of Russia, Rawil Gaynetdin.

AFP also covered the inauguration ceremony of the mosque — one of the biggest in Europe — which cost $170 million (150 million euros) and took a decade to complete.

The Moscow Cathedral Mosque was built on the same site as a previously demolished mosque in the Russian capital, Moscow, according to the report.

According to the website of the Spiritual Administration of Muslims of the Russian Federation (DUMRF), the original mosque was built in 1904, and is one of the few mosques that was not destroyed or closed during the Soviet era.

The old mosque was demolished in 2011 to make way for the current mosque, which at the time was presented as the largest mosque in Russia with the capacity for 10,000 worshippers.

Russian newspaper Izvestia reported about the mixed reactions among the country’s Muslim community on the decision to demolish the old building.