This video shows a university initiation ceremony in Sri Lanka, not 'hijab row incident in India'

A video has been viewed hundreds of times in social media posts that claim it shows the harassment of Muslim women in India during protests against a hijab ban in schools in Karnataka state. The claim is misleading; the video comprises two unrelated clips. The first was taken during an initiation event at a university in Sri Lanka in 2019, while the second shows a Muslim woman confronting hecklers at a college in Karnataka in February 2022.

The video was shared on Facebook here on February 14, 2022, where it has been viewed more than 600 times.

The first half of the video shows men throwing buckets of water at a group of Muslim women, while the second half shows a woman in hijab waving her fist at a crowd of men.

Part of the post's Indonesian-language caption translates to English as: "Indian Court Bans Muslim Students from Wearing Hijab in Schools.

"This is one of the viral videos showing the condition of our Muslim sisters in India.

"The High Court in the Indian state of Karnataka has banned Muslim schoolgirls from wearing the hijab in schools until they make a final ruling. Not only Muslim clothing, clothing and other religious symbols are also prohibited from being worn in every educational institution." The video has also been shared with a similar claim on Facebook here, here and here; and on Instagram here and here.

The posts circulated after a school in India's Karnataka state banned the hijab, sparking protests across the country and highlighting religious tensions in the Hindu-majority country.

The footage of men throwing buckets of water at a group of women shows a university initiation event in Sri Lanka.

A Facebook page called "Lanka Sun News" shared the same video here on February 24, 2019,  saying it showed a "ragging" or initiation incident at the Eastern University in Vantharumoolai, in Sri Lanka's Eastern Province.

The Tamil-language text in the caption accompanying the video partly states: "Please watch this, and share this... Sri Lankan Eastern". 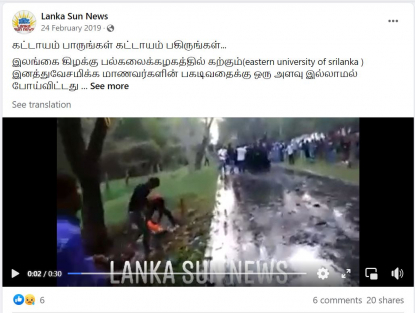 The video was covered by from Puthithu, a news website run by Sri Lankan Tamils living abroad, in a report on February 24, 2019.

"A video of a large number of female students being chased by some male students and dousing them with water has gone viral on Facebook. The senior students of the university have behaved this way towards the freshman students, said those who wrote about the video," Puthithu reported.

"Puthithu has confirmed with students of the Eastern University that the incident took place at the university."

A video on the official YouTube channel for the The Eastern University in Sri Lanka shows a road lined with trees at the 00:39 mark.

The scene also includes women in Islamic clothing walking along the road. The road and the surrounding trees on the campus correspond with the terrain seen in the misleading video shared in February 2022.

Below is a screenshot of a still taken from the official university video (left) next to a still from the misleading video (right):

These scenes also correspond with a street-level photo on mapping platform Mapillary tagged to a location on the Eastern University campus.

Screenshot of the university campus on Mapillary

The footage also circulated in August 2019 with another false claim that it showed the harassment of Muslim women in India's Kashmir region — AFP debunked the claim here.

The second clip was taken from a widely-shared video of a hijab-wearing student being pursued by men yelling Hindu chants as she arrived at her college in the southern state of Karnataka.

The video — uploaded to YouTube here by local news outlet Dighvijay News Live on February 8, 2022 — shows the student, in response to the heckling, waving her fist and shouting the Arabic phrase "Allah-u Akbar", which means God is great.

The student, later identified as 19-year-old Muskan Khan, gave interviews to various Indian media outlets, including NDTV and The Wire.