Did US whistleblower Edward Snowden say Osama bin Laden was living in the Bahamas? Unfounded

A report on a Pakistani website claims Edward Snowden says al-Qaeda chief Osama bin Laden is living in the Bahamas, contrary to US accounts that American Navy Seals killed him in 2011 in Pakistan. Snowden has made no such public claim and the report traces back to a site that declares its content “satirical” and “fictional”.

The report on the Harpal Pakistan website says Snowden claims to have documentary evidence that bin Laden is alive and being paid by the Central Intelligence Agency (CIA).

“I have documents showing that bin Laden is still on the CIA’s payroll,” the report, which first appeared in 2017, quotes Snowden as saying.

Snowden, a former National Security Agency contractor, made global headlines in 2013 when he revealed extra-legal surveillance operations by the NSA.

The report states Snowden claims the CIA moved bin Laden and his family to a secret location in the Bahamas after faking his death.

“He is still receiving more than $100,000 a month, which are being transferred through some front businesses and organizations, directly to his Nassau bank account,” it quotes Snowden as saying.

The report has been posted to Facebook pages in Pakistan with a combined total of more than one million followers.

The report includes a link at the bottom described as its “source”, which leads to a nearly identical article  from 2016 on the Unknown; But Not Hidden website.

The Unknown; But Not Hidden portal, describes itself as a health and motivational website.

The key quotes and wording from both articles are the same as an earlier story on the World News Daily Report, a satirical website.

The World News Daily Report gives the following disclaimer about its content.

"World News Daily Report assumes all responsibility for the satirical nature of its articles and for the fictional nature of their content. All characters appearing in the articles in this website – even those based on real people – are entirely fictional and any resemblance between them and any person, living, dead or undead, is purely a miracle."

Data from social media monitoring agency Crowdtangle shows the satirical article about Snowden appeared at least two years before the Pakistan version that claimed to be real news. 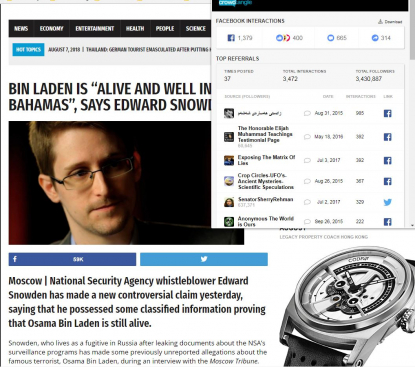 All reports also claim Snowden made his claims to the Moscow Tribune.

But there is no Moscow Tribune newspaper or other major media group with that name, according to AFP’s bureau in the Russian capital.

In 2013, Snowden released a set of files to the media detailing widespread surveillance operations by the NSA.

Snowden's revelations exposed US spying on its allies, including tapping the phone of German Chancellor Angela Merkel.

They also forced the US government to curb the NSA's wholesale collection of Americans' communications data.

He has been living in exile in Russia since 2013.