Did a Muslim refugee vandalize a statue of the Virgin Mary in Italy? False 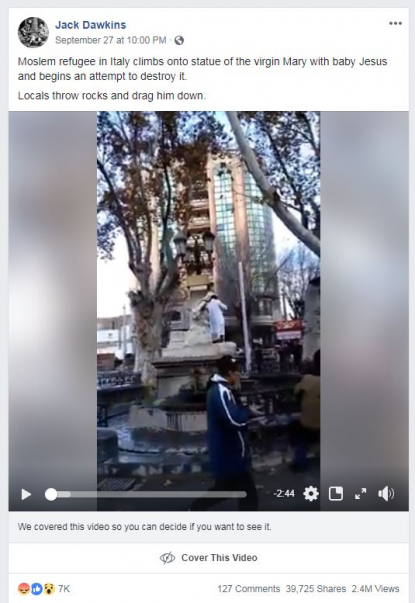 A screengrab taken on October 19, 2018 from the Facebook profile of a person who published the video

In the video, a man with a long beard wearing a white ankle-length dishdasha is seen repeatedly striking the statue of a woman with a chisel, while a crowd of onlookers throw items at him in an attempt to get him to stop. A few minutes after the video begins, several people in uniform appear and force the man down from the base of the statue.

The caption that comes with the images reads: “Moslem refugee in Italy climbs onto statue of the virgin Mary with baby Jesus and begins an attempt to destroy it. Locals throw rocks and drag him down.”

However the video was not recorded in Italy, but in Setif, Algeria, on December 18, 2017. And the statue being vandalized does not represent the Virgin Mary, but rather a mythological creature known as a Naiad which has adorned the Ain El Fouara fountain since 1899. 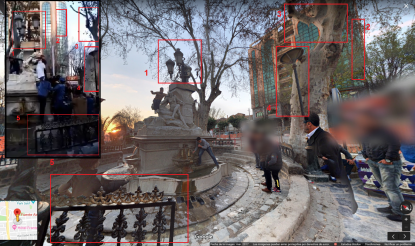 Screengrab taken on October 5, 2018 from Google Maps and a close look at the area details

The statue at the Ain El Fouara fountain was first vandalized in April 1997, during the Algerian civil war, when a group of Muslim fundamentalists detonated dynamite at the fountain. Following the December 2017 incident, on October 9, 2018, news sites reported that a 30 year-old man climbed up to the statue and attacked it with a hammer.

Although the video circulating on Facebook shows a real event, it's false to claim that it is footage of a Muslim refugee vandalizing a statue of the Virgin Mary in Italy.