Skip to main content
The upper section is seen partially empty as US President Donald Trump speaks during a campaign rally at the BOK Center on June 20, 2020 in Tulsa, Oklahoma (AFP / Nicholas Kamm)

Social media posts shared thousands of times claim to show huge crowds of supporters gathered ahead of President Donald Trump’s campaign rally in the southern US state of Oklahoma. However the photo used to back up the claim was taken in Washington, the US capital, at least one year ago during a biker festival.

“A small crowd has gathered for the #TrumpRallyTulsa already,“ one Twitter user wrote on June 19, 2020, the day before the president’s rally, which was billed in advance as an extravaganza that would see an indoor stadium filled and an overflow area packed with spectators outside. 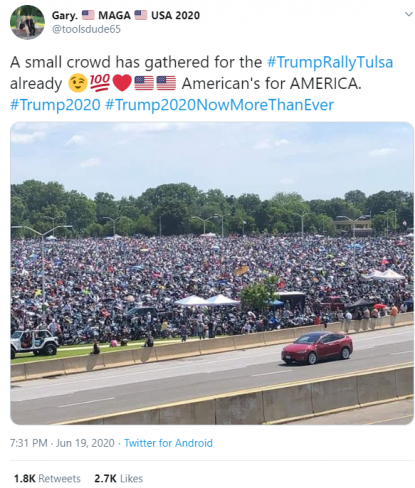 Facebook users shared the same photo with an identical caption, some jokingly specifying that they were quoting CNN in a possible jibe at media reports about what proved to be lower than expected turnout on the day of the rally. 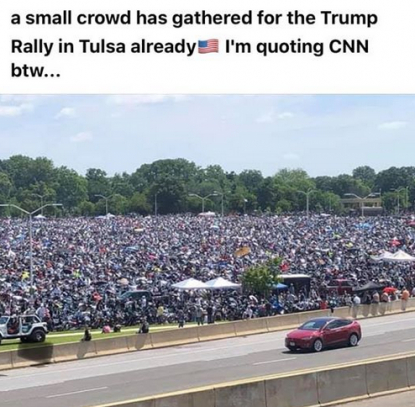 The image does not show Tulsa but the north parking lot of the Pentagon, the Department of Defense headquarters in Virginia, only a few miles from the White House in Washington. Several visual elements visible on Google Street View confirm this, and are circled in red below, notably: a small tree, a patch of grass, and a structure at the back of the parking lot. 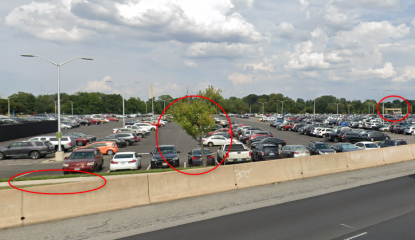 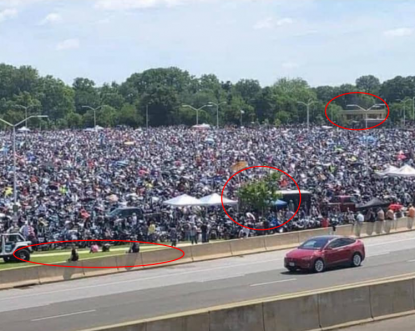 AFP Fact Check could not date the original photo used out of context, but it was likely taken during Rolling Thunder, a bikers for veterans event dedicated to US prisoners of war or missing in action personnel.

According to MapChecking, a crowd size estimation tool, the Pentagon north parking lot can hold 70,000 people at a density of one per square metre. Although supporters of the US president did assemble days ahead of his June 20 comeback rally the numbers were never estimated to be anywhere near as large as those shown in the photograph.

A spokesman for the Tulsa Fire Department estimated that just under 6,200 people attended the June 20 rally.

Each year on the Memorial Day holiday, thousands of motorcyclists ride through Washington and on to the Pentagon’s north parking zone in remembrance of lost soldiers. Many thousands more spectators from the DC metropolitan area also flood into the area for the bikers’ spectacle.

The parking area, which is not generally used for festivities, is usually filled with riders and onlookers for this exceptional occasion, as the 2015 video below shows.

The 2020 event, however, was cancelled because of the coronavirus pandemic, making it improbable that the photo was taken this year.

Trump’s rally was his first in three months because of the pandemic. Despite having said that up to a million tickets had been requested by the public, the campaign failed to fill the 19,000 seat Bank of Oklahoma (BOK) Center. Video footage showed most of the arena’s upper tier seats to be unfilled.