A shopper walks past empty shelves in the paper products section of a store in Burbank, California, on November 19, 2020 during a new wave of coronavirus-linked panic buying (AFP / Robyn Beck)

Claims of pandemic spike in suicides are not backed by data

Posts spread by celebrities and liked about 250,000 times on Instagram claim suicides have risen 200 percent since pandemic-linked lockdowns in America began. This is false; there is no data to support such a statement, the timing of which coincides with new restrictions against record coronavirus cases as the US enters winter.

“Suicide figures are up 200% since lockdown. Could 2 friends please screen shot and repost?” said a November 15, 2020 post by Kris Jenner, matriarch of the celebrity Kardashian family. 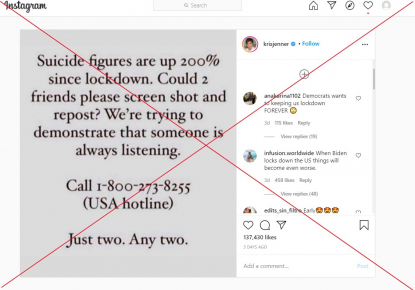 The post, liked more than 137,000 times, added: “We’re trying to demonstrate that someone is always listening. Call 1-800-273-8255.” The number is real and connects to the National Suicide Prevention Lifeline which offers round-the-clock support to callers in distress.

Other celebrities also posted the same message and Lifeline number to their millions of followers. Among them were Viola Davis -- a star of "The Suicide Squad" -- actress, designer and Beyonce’s mother Tina Knowles-Lawson, and Beverly Hills publisher Mark Kurian.

But there are no publicly available statistics about suicide rates this year, let alone figures that show suicides have risen 200 percent “since lockdown”. Such numbers, as with other key national demographic data, are usually known much later.

The novel coronavirus led to stay-at-home orders as early as March in parts of the United States including California, Michigan and New York. Eventually most of the country was under some type of restriction, which upended everyday economic activity and forced tens of millions out of work.

President Donald Trump, who claims that shutdowns lead to suicide along with other mental and physical problems, pushed for reopening.

“People are losing their jobs. They’re committing suicide. There’s depression, alcohol, drugs at a level that nobody’s ever seen before,” he said during an October 22, 2020 presidential debate.

However, Rajeev Ramchand, senior advisor for psychiatric epidemiology and suicide prevention at the National Institute of Mental Health, said of the period since March: “I have not seen any data on the national level that has looked at suicide deaths.”

And as for suicide attempts during the pandemic, or the number of people with suicidal thoughts, the picture is also not clear, he told AFP by phone.

“Suicide deaths take a long time to identify and typically we do not have national data on suicide deaths for 13 months until after the end of the calendar year,” which means data reflecting the pandemic might not be available until January 2022, he added.

National figures are compiled by the Centers for Disease Control and Prevention, whose latest numbers are from 2018 when there were 48,344 suicides in the United States.

“Essentially, we have no data (and won’t for quite awhile) showing how the pandemic has affected national rates of suicide,” Chris Maxwell, director of public relations and media at the American Association of Suicidology, told AFP in an email.

Jonathan Singer, president of the association for researchers and others involved in suicide prevention, added that a historic increase of 200 percent would have stood out.

“We would have heard something from the funeral homes, medical examiners, or clergy if this were anywhere near true. We haven’t,” he said by email.

The National Suicide Prevention Lifeline, whose phone number appears in the posts, said in an emailed statement that it is “grateful to those raising awareness of suicide prevention and the Lifeline” but “we do not have evidence that suicide rates in the US have risen over the past year.”

Ramchand, the NIMH advisor, said one study this year did examine suicide deaths but it was limited to reports filed by Veterans Affairs hospitals.

“Findings to date do not indicate pandemic-era increases in site-reported Veteran suicides” reported since March, the VA study released in November said.

Another limited study, which has not been peer reviewed, compared suicide death data in Massachusetts during the March-May 2020 stay-at-home order with a corresponding period the year before, and previous years.

“Our data are reassuring that an increase in suicide deaths in Massachusetts during the stay-at-home advisory did not occur,” the authors wrote.

Researchers from the United Kingdom and Australia included the Massachusetts analysis along with studies from Victoria state in Australia, England, Japan and Norway as part of an ongoing effort to track suicides during the pandemic.

“Overall, the literature on the effect of Covid-19 on suicide should be interpreted with caution,” the researchers said on November 12, 2020 in British medical journal The BMJ.

“Nevertheless, a reasonably consistent picture is beginning to emerge from high income countries,” they said, citing reports that suggest “either no rise in suicide rates… or a fall.”

Claims that suicides were up 200 percent during the pandemic previously surged in August 2020 on Facebook, an AFP search on social media analysis tool CrowdTangle showed.

The claims re-emerged ahead of the annual Thanksgiving holiday while the US experiences record levels of coronavirus cases. Chicago implemented a stay-at-home advisory, schools closed in New York and California ordered a curfew.

President-elect Joe Biden said a national shutdown would be counterproductive but some comments attached to the Instagram posts falsely claim he wants to “lock the whole country down” and Democrats want “lockdown FOREVER.” Ramchand said this is “a very stressful period for everyone” and applauded publication of the Lifeline support number. But he also cautioned against raising false alarms and said: “We need to make sure that we’re… using accurate, reliable and valid data whenever possible.”