“Costa Rica will soon be free of plastic and carbon," read an exaggerated claim in articles and videos shared tens of thousands of times online, even if the Central American country has pledged to reduce its fossil fuel emissions and get rid of single-use plastics.

These websites praise some vague Costa Rican measures:  “Since 2014 the country’s energy has been coming from 99% renewable sources” and “[w]hile it may sound like a pipe dream, the country is already almost there” (referring to Costa Rica becoming the world’s first decarbonized society).

Meanwhile, a Facebook video post by UNILAD claiming “Costa Rica aims to eradicate all single-use plastics and to be carbon free by 2021” was posted in February this year and has had more than 194,000 views. Another video post by The Years Project published in May 2018 declares that “Costa Rica plans to ban fossil fuels by 2021”. The accompanying video, which has been watched over 3.9 million times, quotes President Carlos Alvarado’s inauguration speech where he says: “We have the titanic and beautiful task of abolishing the use of fossil fuels in our economy to make way for the use of clean and renewable energy”, but makes no mention of attaining this by 2021.

Costa Rica has in fact not taken such radical measures.

Proposed legislation, which aims to eliminate the marketing of single-use plastics and certain products made of polystyrene or microplastics, is currently under discussion in Congress. The proposed law would forbid public institutions to purchase these products.

The goal is therefore not to eradicate all plastic, but to impose a gradual tax on plastic products, depending on their pollution capacity.

Should the bill pass, the funds generated by this tax will be used to finance recycling projects and the reuse of plastic.

The road ahead is still long: in June 2018, Eugenio Andrevetto, environmental health director in the ministry of health, explained to La Nacion, the number one Costa Rican daily, that the country was discarding 564 tons of plastic per day and recycling only 14 tons. 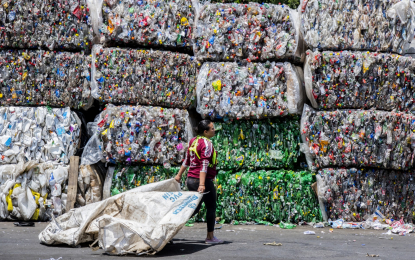 In 2012 the Costa Rican government set the goal of becoming carbon neutral by 2021. The plan entails various actions to reduce its carbon footprint and to improve its forest carbon offset.

Thus, instead of eliminating its carbon emissions by 2021, Costa Rica aims to neutralise them by reducing emissions and compensating with reforestation.

The government in 2019 introduced a plan to decarbonise the economy. In this case, the objective is indeed to stop the use of fossil fuels, but only by the year 2050.