China responsible for 90 percent of the world's carbon emissions? No, it's closer to 30 percent

An image has been shared hundreds of times in multiple posts on Facebook that claims China is responsible for 90 percent of the world’s carbon emissions. The claim is false; while China's carbon emissions were the highest of any country in the world in 2018, its share of total global emissions was about 30 percent, according to estimates by the European Commission.

The false claim was published here in a Facebook post on December 6. It has been shared more than 500 times.

The text superimposed on the image in the misleading post reads: “China produces 90 percent of the world’s carbon emissions pollution! They didn’t go to China because it’s already a communist country!”

A speech bubble next to Thunberg reads: “Why are we not going to China?” In a second speech bubble, Soros appears to say “Shut up and stick to the script!” 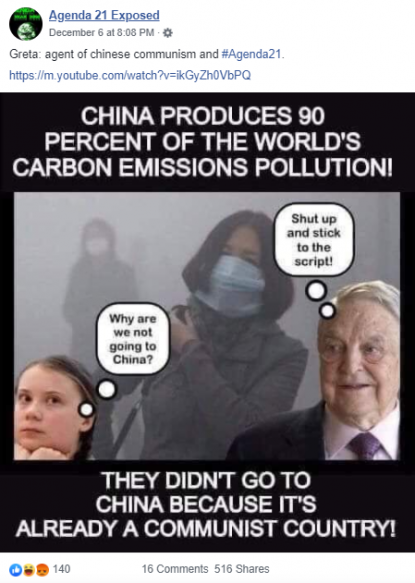 Posts with a similar claim have been published on Facebook here and here.

The claim is false; while China's carbon emissions were the highest of any country in the world in 2018, its share of total global emissions was estimated to be 29.7 percent -- not 90 percent.

The data was compiled by the Emissions Database for Global Atmospheric Research, a joint project of the European Commission and the Netherlands Environmental Assessment Agency. It has published data on carbon dioxide emissions since 1970.

According to the organisation’s most recent report, China topped a table of carbon emissions worldwide, contributing 29.7 percent of all global emissions in 2018, followed by the United States (13.9 percent), the European Union (9.1 percent) and India (6.9 percent).

Below is a screenshot of the table, which appears on page 12 of the report: 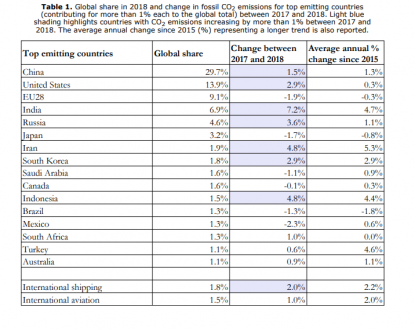 Below is an interactive map produced by UK-based scientific publication Our World in Data which shows the changes to annual carbon emissions by country from 1751 to 2017. The map uses data from the Global Carbon Project and the Carbon Dioxide Information Analysis Center.

AFP Fact Check has also debunked several claims involving Greta Thunberg here. One of which includes a doctored photo here of her and Soros, who is also a regular target for conspiracy theories.