Multiple posts shared hundreds of times on Facebook claim Canadian Prime Minister Justin Trudeau signed an executive order allowing Nigerian professionals a limited period in which to apply for extended “E-visas”. This is false; the Nigerian High Commission in Canada has denied the claim, and AFP Fact Check found that a picture published with the posts was from an entirely different event.

One post shared more than 500 times since December 7, 2020, and archived here, claims that Canadian Prime Minister Justin Trudeau had signed  an executive order stating that “qualified citizens of the Federal Republic of Nigeria in some special professions are eligible for 10 years Canada E-Visa (sic).” A screenshot taken on December 9, 2020, showing the false post

It further claims that “the terms of the Executive Order allows ONLY 6,000 citizens of the Federal Republic of Nigeria taking effects from the 21st day of September, 2020 till 30th Day of December, 2020 (sic)”, implying a limited period for applications. 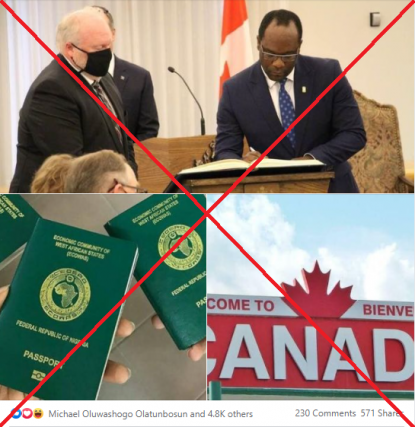 The false posts were also shared alongside these images

In addition, the post lists purported requirements for potential applicants and ends with the apparent sanction of Nigerian High Commissioner to Canada, Adeyinka Asekun, dated September 21, 2020.

Yet the Facebook page responsible for the post and calling itself “Nigerian High Commission - Ottawa, Canada” was only created on December 5, 2020, more than two months after the stated window period for applications purportedly opened.

Three images were included in the post, one of them showing what appears to be a signing ceremony. The others show the Nigerian passport and a generic “welcome to Canada” sign.

The same claim was also shared here and here.

Both the post and the page which published it resemble an earlier online hoax claiming the US had opened an E-visa programme for Liberians and Kenyans, debunked here by AFP Fact Check.

Likewise, the claim that Canada established an E-visa programme for qualifying Nigerians is a fabrication.

Firstly, there is no online record of Trudeau signing any executive order on migration or electronic visas.

Then, the first of the images posted alongside the false claim shows Kaycee Madu, a Nigerian-born Canadian who was appointed Minister of Justice and Solicitor General of the Canadian province of Alberta in August 2020. The picture had nothing to do with Trudeau signing an executive order -- the prime minister was not even at the ceremony for Madu.

Thank you, everyone, for all the well wishes. I am beyond humbled to accept my new role as Minister of Justice and Solicitor General - where I will pursue fairness, equality, and justice for all with every ounce of strength I have. More here: https://t.co/nmLf4bbsC3 #ableg pic.twitter.com/tHt8JrEthr

Finally, there is no official mention of the purported executive order on the Nigerian High Commission’s website in Canada. Instead, there are links to its social media channels where the claim has been rejected as false.

“There are a number of telltale signs on this particular scheme that a discerning person would have picked up on,” he said, pointing out that the post referenced a “consular-general” but that “there is no such person”.

“If such a thing were to take place, it would be so big, so major that it will be both on our website and the IRCC [Immigration, Refugees and Citizenship Canada] website, and there probably would be an authentic press release,” Asekun added. “People seem to be a little too willing to want to believe this thing, which is absolutely false and fraudulent.”

Official migration programmes between the two countries already exist and would not require an executive order.

The Canadian Federal Skilled Worker programme, a part of the country’s express entry programme, which allows people with sought-after skills or work experience to immigrate to Canada, is very popular in Nigeria.

In 2019, Canada admitted 8,423 Nigerians into the North American country through its express entry programme, the second-highest admission, just after India.