Social media posts that surfaced in mid-December claim that the Mayor of Calgary Naheed Nenshi called Syrian refugees more intelligent and more educated than rural Albertans. This is false. The posts suggest that Nenshi made this statement on December 18 on a local radio station, although he was not on the air that day. In a December 17, 2015 interview on that same radio station, Nenshi did say Syrian refugees tend to be urban and educated, but made no contrast with rural Albertans.

In just two days, thousands of online users shared reports that Nenshi, the mayor of Calgary, the largest city of the Canadian province of Alberta, told a local radio show that “Syrian refugees are more intelligent and educated than the rural Albertans.” 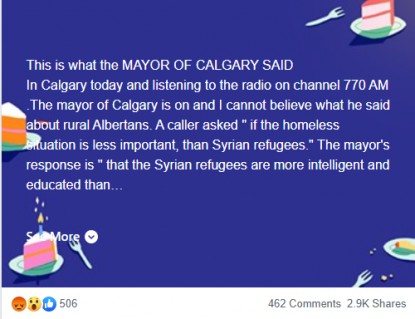 Various versions of the claim were shared by several Facebook users, using the same wording and identical punctuation.

However, the quotes attributed to Nenshi are wrong and out of context.

“The mayor was not on 770 News yesterday,” Adam Johnson-Noble, communications strategist for Nenshi, told AFP on December 19.

770 News, the local radio station also known as CHQR, confirmed to AFP that they had not aired any interviews with the Muslim mayor this week.

John Vos, director of talk and talent at CHQR, told AFP that the quote is a distorted version of an interview the mayor gave to now-retired CHQR journalist Angela Kokott on December 17, 2015, the year Canada pledged to welcome 25,000 Syrian refugees.

At the time, Nenshi would go on air once a month and take calls from listeners. It was during one of those segments that a citizen asked why Canada could help Syrian refugees settle yet failed to assist homeless Canadians. (15:25 on the recording below)

“As a Canadian country, we’ve taken in 10,000 refugees, we have plans for 25, maybe even 50 if Mr. McCallum sees fit. It’s a wonderful thing and everything’s come together both publicly and privately. What are we doing wrong with the homeless if this can happen in three or four months and we’ve been trying for 20 years to help the homeless?” the caller named Don asked.

Nenshi answered that refugees tended to be urban and educated, and that providing them with accommodation was often enough to help them start a new life, whereas the various issues affecting homeless people, including substance addiction or mental health problems, made helping them more complicated.

It is likely that this four year old quote is the basis for the current misleading posts. “It seems that someone has really misunderstood what was said,” Johnson-Noble told AFP in reference to the 2015 interview.

CHQR host Rob Breakenridge aired the full interaction on December 20, 2019 to contextualize the misleading claim for listeners. That segment can be found in CHQR’s audio vault by selecting December 20, 12PM, and skipping to 35:34.