A video that claims Filipino boxing champion turned politician Manny Pacquiao has been disqualified in the 2022 presidential election has been viewed tens of thousands of times online in March 2021. The claim is false: the Philippine Commission on Elections told AFP he has not been disqualified because the filing of candidacies for the vote hasn’t even started yet. The video also misrepresents a social media post accusing Pacquiao of violating election rules.

Jay Sonza is a former broadcaster with a history of posting misleading claims online, according to Philippine fact-checking organisation Vera Files.

COMELEC is the Philippine Commission on Elections, a government body tasked with enforcing election law, including for the upcoming presidential race in May 2022. 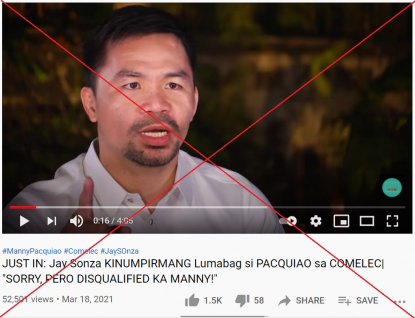 A screenshot of the misleading post, taken on March 22, 2021

“It appears people’s champ and senator Manny Pacquiao has been disqualified and will face charges, according to… Jay Sonza,” a man narrating the video in Tagalog says. “(Pacquiao) clearly violated the rules and regulations of Comelec for the 2022 election, according to Sonza.”

World boxing champion and elected senator Manny Pacquiao has played coy with his 2022 plans, neither confirming nor denying whether he is seeking the presidency, local media Inquirer.net reported.

An identical video has emerged on Facebook and in blog posts, including here, here and here.

However, the claim is false; Pacquiao has not been disqualified from the 2022 presidential race, according to COMELEC.

“The link you provided clearly states that it was only reporting Jay Sonza’s OPINION. It’s still wrong,” COMELEC spokesman James Jimenez told AFP in a Viber message on March 19, 2021.

“Jay Sonza obviously does not speak for the Comelec.”

“Sen. Pacquiao is not even a candidate yet. And in any case, the campaign period hasn’t even begun so the premature campaigning rules supposed to have been violated are still NOT IN EFFECT.”

The period for filing 2022 candidacies is set for October 1-8, 2021, according to COMELEC’s election calendar. The campaign period for candidates running for national posts does not begin until February 8, 2022.

While the post includes a Pacquiao campaign banner that Sonza alleges shows an “election violation,” it does not claim the senator has been disqualified from running in 2022.

“I saw this yesterday in one part of my property near the road, and this tarpaulin has been set up by whoever has been ordered by Manny Pacquiao. Maybe they set this up at night because it wasn't there yesterday,” the Tagalog-language post reads.

“Maybe this is what (Pacquiao) means when he says they are busy going around the country. Comelec, here's exhibit A of (Pacquiao's) election violation. I took a photo of it first before I had it removed, witnessed by village officials”.