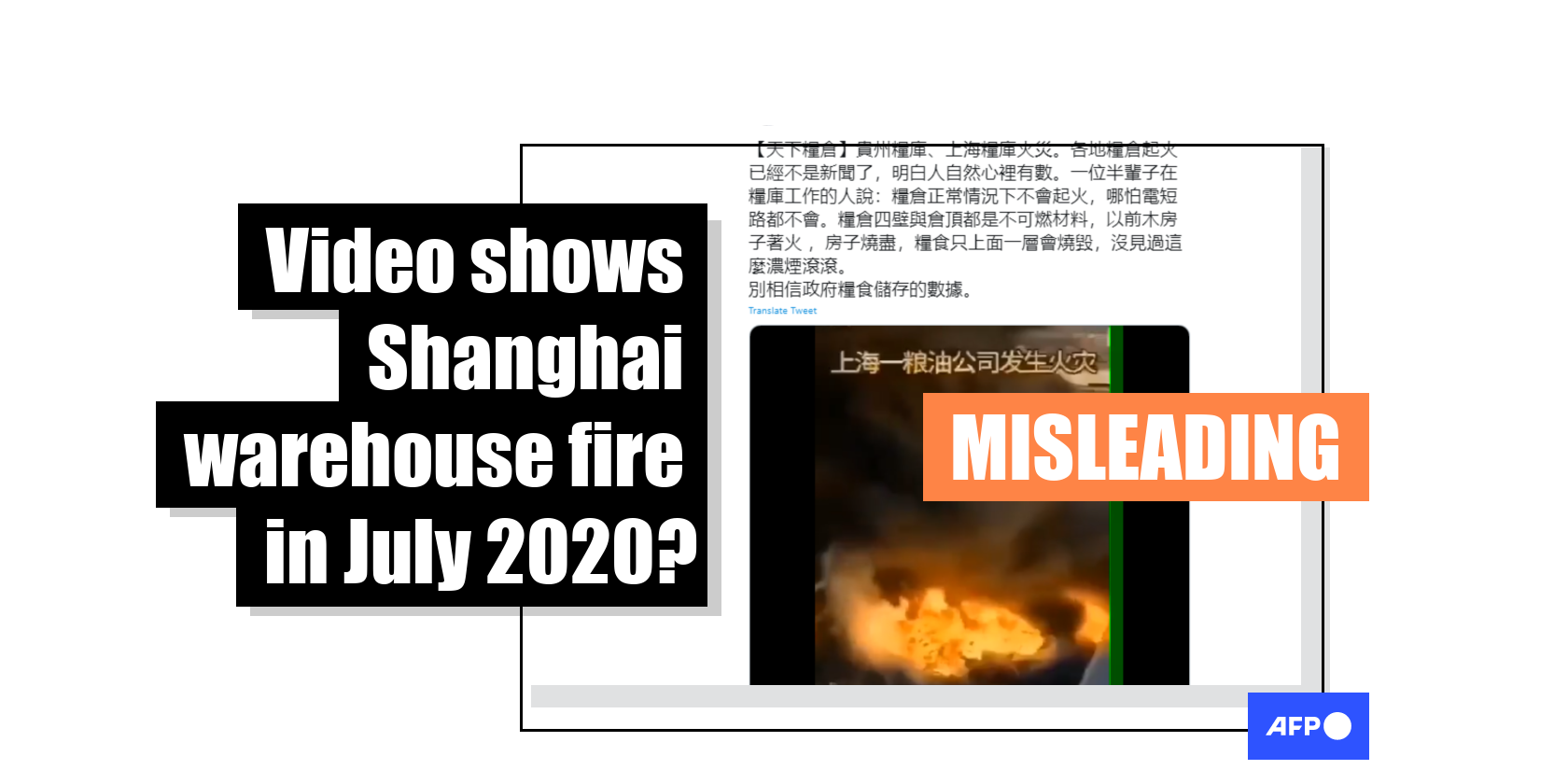 A video of two clips that purport to show a burning structure has been viewed thousands of times in multiple posts on Facebook, Twitter, YouTube and online forums in July 2020 alongside a claim that the fire occurred at a warehouse in Shanghai. The claim is misleading; both clips correspond to visuals of a fire at an oils and grains company in Shanghai that were released by Chinese fire service in December 2019.

The video consists of two clips: the first clip shows a bird’s-eye view of a burning structure and the second shows a ground-level image of a similar structure fire. 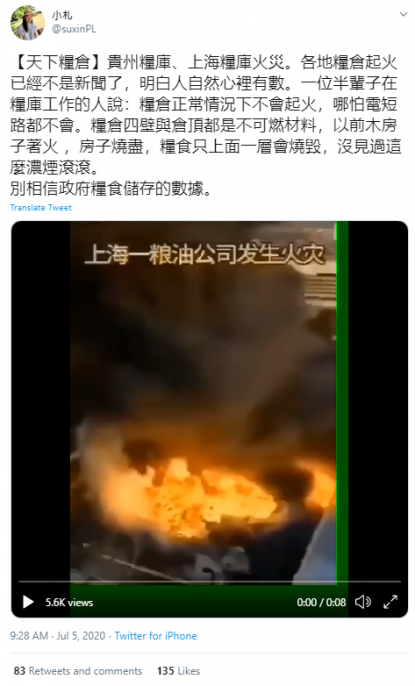 The text overlaid at the top of the video translates from simplified Chinese to English as: “Fire scorched a groceries and food company in Shanghai / Shanghai Fire Service dispatched 12 teams of firefighters, 46 fire engines and 322 commanders to the scene”.

The traditional Chinese-language caption of the Twitter post translates to English as: “[Food reserves] Fires have been reported at grain depots in Guizhou and Shanghai, but similar fires that occurred at various grain warehouses across the country are not news. People with a clear mind would know what’s going on. To quote a person who worked at a grain depot half their life: ‘Grain depots don’t catch fire under normal circumstances, even if there is a short circuit, because their walls and roof are made of inflammable materials. Also, there were cases where wooden houses were burned to the ground, but the grains inside only had their surface scorched. I have never seen thick smoke and roaring fire like this, so don’t believe in information from the government about food reserves.”

Comments under the tweet can be translated as “the food reverse warehouse is on fire, there must be something sketchy in it! Nothing can be found after the fire! The greedy officials are very tricky!” and “Destruction of the national food reserve evidence”.

A reverse Google Image search of keyframes extracted from the video found a higher-definition version of the first clip in this report published by Storyful, a social media news and intelligence agency, on December 13, 2019.

The footage, credited to “China Fire Service”, shows an industrial fire in Shanghai’s Pudong district, according to the report.

Below is a screenshot comparison of the first clip in the misleading post (L) and the footage published by Storyful (R) with similar features circled in red: 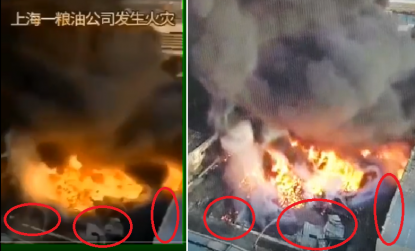 The simplified Chinese-language caption states: “[Shanghai: groceries and food company fire under control] A fire broke out at Shanghai Kerry Oils & Grains Industrial Co on 118 Gaodong Road, Pudong, Shanghai, at 11:56 December 13. Shanghai Fire Service’s rescuers responded to calls for help and dispatched 12 teams of firefighters, 46 fire engines and 322 commanders to the scene. The fire has now been brought under control. No casualties were reported.”

The second clip corresponds to a photo published here on the Chinese internet portal Sohu.com on December 14, 2019.

The photo, the second down from the top, is credited to Shanghai Fire Service.

Below is a screenshot comparison between the second clip in the misleading post (L) and the Sohu photo (R) with similar features circled in red:

A screenshot comparison of the second clip in the misleading photo and the Sohu photo.

The headline of the Sohu article reads: “Fire broke out at Shanghai oils and grains company midday December 13”. The article reports on a fire at the same company mentioned in the China Fire Service Weibo post.