According to a Facebook post, Canadian railcar manufacturer Bombardier’s job cuts in Thunder Bay are due to the Liberal government’s carbon tax, while the opening of a Bombardier site in California is allegedly due to the US president Donald Trump’s reduction of corporate tax rates. Bombardier cited the lack of public contracts as the reason for a railcar factory layoffs in Ontario, while the California site will host operations that previously took place in New York State. 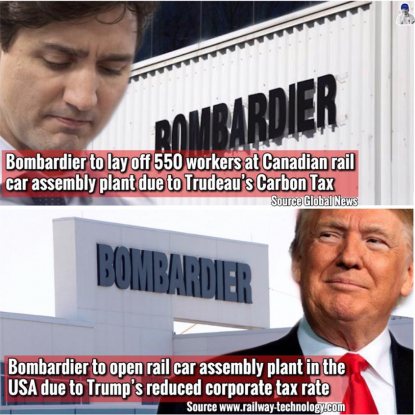 The post presents true facts about where Bombardier plans to reduce and add rail car assembly jobs, but there is no evidence that the US corporate tax rate or Canada’s carbon tax are the reasons for the moves.

Citing this article from Canadian media Global News, the first half of the meme correctly asserts that 550 workers at Bombardier’s Thunder Bay, Ontario rail car assembly plant will be laid off.

On July 10, Bombardier confirmed what Global News published the day before, explaining that half the workers in the Ontario plant would lose their jobs.

The meme claims Prime Minister Justin Trudeau and his Liberal government’s carbon tax are the cause of the layoffs. The carbon tax is a federal levy of $20 per tonne of CO2 emitted, imposed on four provinces that had not already implemented any scheme to tax pollution in April 2019 as this AFP article from the time explains. The central province of Ontario, where Thunder Bay is located, was one of the four.

However, the Global News article cited by the meme makes no mention of the carbon tax. Neither does the company’s press release. Instead, the press release says the “decision is due to the cyclical nature of our business and the ramp down of our two high cadence programs,” citing Metrolinx BiLevel and TTC LRV, two large contracts with Toronto area governments about to end with no orders to follow.

Eric Prudhomme, head of public relations for Bombardier in the Americas, added in an email to AFP that Bombardier’s problems are compounded by the Buy American Act, the US government purchase policy, which currently requires 65 percent of the costs of components and subcomponents for rolling stock, which includes rail cars, to be produced in the United States. This figure will increase to 70 percent in the fiscal year 2020.

According to the second half of the meme, Bombardier will open a rail car assembly plant in California, because of favorable corporate tax rates implemented by the Trump administration. The post cites this article from Railway Technology, an industry media. However, the article makes no mention of corporate tax rates.

As the company announcement states, Bombardier Transportation will be “opening a rail car assembly site in Pittsburg, California,” in order to provide rail equipment for the “Fleet of the Future,” a 775-car contract with the San Francisco Bay Area Rapid Transit District (BART).

However, the press release specifies that operations for the BART contract are already taking place in the United States, at the company’s plant in upstate New York and that they already had 500 employees in the Golden State. Moving a plant from one state to another within the United States will not change Bombardier’s federal income tax.

The company said the move from New York to California “will serve several purposes, including retaining and creating local jobs in Pittsburg and freeing up space at the New York site for new and upcoming East Coast orders.”

Bombardier benefitted from a California Competes Tax Credit, “an income tax credit available to businesses that want to come to California,” but this is a state tax policy, not a federal one.

Maryanne Roberts, public relations officer for Bombardier in the US, provided no comments on the Facebook publication and instead referred AFP Fact Check to the press release for the reasons for the move.