Biden and Harris did not take same plane to Georgia

Social media posts claim US President Joe Biden and Vice President Kamala Harris have traveled together in contravention of standard security measures, citing a photo from a trip to Georgia as evidence. This is false; journalists who covered the trip said the two flew on separate aircraft but were both aboard one plane for a briefing after their arrival.

“The rule is the Prez, and the Veep never travel together, for obvious reasons. Then why the hell is this happening? More importantly, why is no one saying anything about it??” says a March 20, 2021 Facebook post that includes a photo of the US leaders walking down the steps of Air Force One. 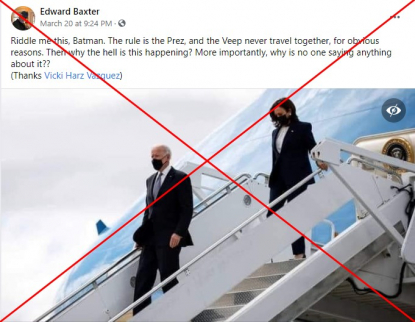 The US president and vice president -- who is next in line for the presidency -- generally do not travel together for security reasons.

The photo in the social media posts is a Reuters image from Biden and Harris’s March 19 trip to Georgia. The trip was originally intended to focus on his plan to counter Covid-19, but deadly shootings in Atlanta prompted the president to add a meeting with Asian-Americans and Pacific Islanders (AAPI) community leaders and condemn rising violence against them.

“They flew (on) separate planes and landed separately” at an air base in Georgia, Baradat said.

“I was aboard Air Force One with the press corps. VPOTUS Harris left on a separate plane (AF2) before us from Andrews Air Force Base,” he said, referring to the call signs of US Air Force jets carrying the president and vice president.

This was confirmed by pool dispatches from other journalists on the trip that say Harris went to Air Force One for a briefing with Biden soon after the president’s aircraft landed. They then exited the aircraft together to visit the CDC headquarters and meet with AAPI leaders.