BC and Alberta will not change driving laws on February 1

According to Facebook posts from January 2020, drivers in the Western Canadian provinces of British Columbia (BC) and Alberta will no longer be allowed to talk to passengers, adjust the radio, eat or smoke while driving, starting February 1. The posts claim that rule breakers will be charged with distracted driving, face high fines and earn demerit points. This is false; the Royal Canadian Mounted Police (RCMP), BC and Alberta governments told AFP that no changes to driving laws go into effect in February.

Facebook posts shared by users in Canada show a photo of a notice titled: “Distracted Driving Laws In Effect February 1, 2020.”

The posts claim that a long list of activities including eating, drinking, smoking, vaping, grooming, adjusting the radio, listening to extremely loud music, or talking to passengers, will be considered distracted driving in BC and Alberta. “The Government has announced warnings are not to be given,” it ads. 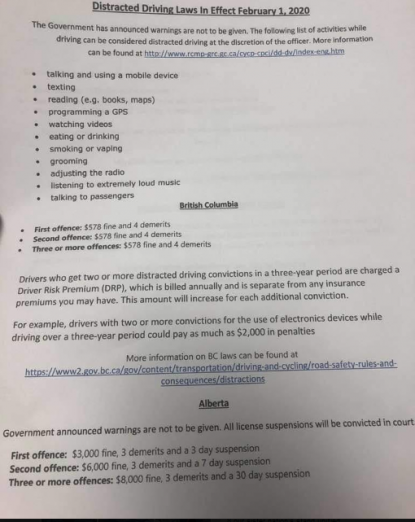 The notice urges readers to get more information on this RCMP website, which is just a page describing factors that can contribute to distracted or fatigued driving. 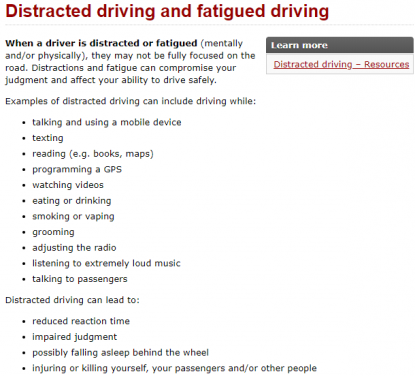 There will be no changes to driving laws in BC or Alberta on February 1, 2020.

Hope Latham, a spokeswoman for the BC Ministry of Public Safety, told AFP, “There are no changes planned to BC’s distracted driving laws at this time.”

Halskov explained that the posts play on the distinction between “distracted driving” and “driving without due care and attention.”

In BC, distracted driving is referred to as “use of electronic device while driving” in the Motor Vehicles Act. This is illegal in all Canadian provinces, save under specific circumstances, such as using a hands-free device or talking to the police.

Driving without due care and attention is an offense that encapsulates situations that do not involve the use of an electronic device. Those activities are not illegal, but they could be used as evidence of improper driving, which carries a minimum fine of Can$100.

BC Driving Lawyers, an association specialized in traffic cases, points out that most tickets issued by the police will be around Can$368.

“I have never heard of a situation where a driver has been charged with driving without due care and attention for talking to a passenger,” Halskov told AFP.

CanLII, an open access database for Canadian legislation and legal cases, shows 6,542 results for legal cases involving driving without due care and attention. In cases reviewed by AFP, such as this one or this one, the accused were charged because their lack of attention or care led to an accident.

Nothing suggests any changes to Alberta’s Traffic Safety Act will come into effect this February either.

“These rumours around new rules and stricter penalties are false,” Brooklyn Elhard, press secretary for the Alberta ministry of transportation told AFP in an email.

“I’m not aware of any upcoming proposed legislation change to the distracted driving laws,” Laurel Scott, a spokeswoman for the RCMP’s Alberta division told AFP in an email.

Scott added that the fines for Alberta in the false post “are non-existent.”

Under Alberta’s current traffic laws, the penalty for distracted driving is a Can$287 fine and three demerit points, not Can$3,000 as the false posts claim.

In Alberta, reading and “personal grooming” are considered distracted driving, but the following activities are not specifically restricted by law. 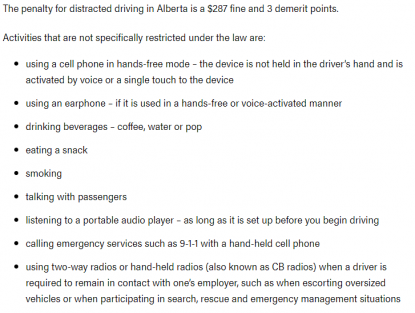 Screenshot of a government of Alberta webpage taken on January 29, 2020

On January 28, 2020, the Alberta government webpage for distracted driving was warning individuals not to believe reports of upcoming changes in legislation.

Screenshot of a government of Alberta web page taken on January 29, 2020

Another Facebook post that gained traction in Canada and Australia in late 2019 claimed that distracted driving would lead to a three year license suspension, starting January 2020. That claim was also false, as this article shows.