Facebook posts shared more than 20,000 times claim that Barnes & Noble has placed books satirizing President Donald Trump in its children’s section. This is false; the bookstore has denied it, and the books are marketed to adults.

“These are on the Barnes and Nobles shelf and this is the kids book section!,” reads text that appears over an image of two books -- “If You Give a Pig the White House” and “Dumpty” -- in one post. 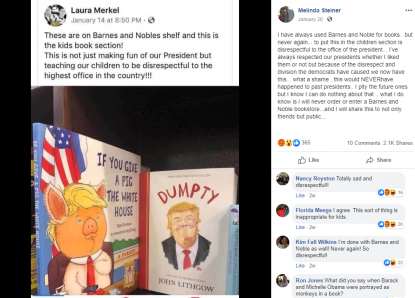 “This is not just making fun of our President but teaching our children to be disrespectful to the highest office in the country!!!,” the text says.

“This sort of thing is inappropriate for kids,” one person commented on the post, while another wrote: “Totally sad and disrespectful!!”

Similar posts have been shared on Facebook here, here, and here, as well as on Twitter here and here.

Barnes & Noble denied that the books were shelved in the children’s section.

“We have always carried political satire books, including the ones you mention, in the humor sections of our stores, not the children’s sections,” Alex Ortolani, director of corporate communications, told AFP by email.

The books are also marketed to adults, according to their publishers.

The book tells the story of “a coiffed and blustery pig” that “shoved his way into the White House,” it says.

And “Dumpty” is “not a children’s book,” Jenn Jensen, associate director of marketing at publisher Chronicle Prism, told AFP by email.

The book is described as “a satirical poetry collection” that chronicles “the last few raucous years in American politics.”