Skip to main content
A woman in Bangladesh is vaccinated for Covid-19. (AFP / Munir Uz Zaman)

A Bangladeshi broadcaster has aired a report about Indians who allegedly became “magnetic” after receiving a coronavirus vaccine. The report was quickly picked up by various news outlets and social media users who shared the video of men sticking coins and metal pliers to themselves. The claim is misleading: the broadcaster told AFP it has removed its original video as it contained inaccurate reporting. Experts have rubbished the claim that Covid-19 vaccines can make the human body magnetic.

The report was posted here on YouTube by Bangladeshi television channel Jamuna TV on June 14, 2021. It was later removed by the broadcaster.

The broadcaster shared a similar report here on its website. 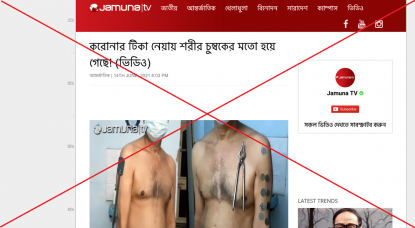 ‘‘It was claimed that the bodies of a number of people in the West Bengal state of India turned magnetic after they took a Covid vaccine,’’ the Bengali-language article reads.

“Lots of videos and photos circulating on social media show coins, spoons, shovels, mobile phones, etc have been sticking to the body after taking the vaccine.

“There were four such men found in West Bengal alone who claimed their bodies turned magnetic after they took the jab.’’

Jamuna TV has removed the report from its YouTube channel and corrected its print article, which now refers to the claim as “absurd”.

Rubel Mahmood, a spokesman for the station, told AFP that the video contained inaccurate reporting.

“The headline and thumbnail in our YouTube report do not substantiate the inaccuracy of the claims of a human body becoming magnetic after receiving a vaccine in India’s West Bengal,” he said.

“The video has been taken down from YouTube because it might mislead the audience and create hesitancy among them to receive vaccines.”

“Getting a Covid-19 vaccine cannot cause your arm to be magnetized. This is a hoax, plain and simple,” said Dr Stephen Schrantz, an infectious diseases specialist at the University of Chicago Medicine.

Dr Thomas Hope, vaccine researcher and professor of cell and developmental biology at Northwestern University Feinberg School of Medicine, said: “This is impossible. There’s nothing there that a magnet can interact with, it’s protein and lipids, salts, water and chemicals that maintain the pH. That’s basically it, so this is not possible.”

Mick West, a British-American science writer published a video on Metabunk.org, a website dedicated to debunking pseudoscience, calling the claims “a new twist on an old carnival trick.”

He demonstrated that magnets, coins or other smooth objects will stick to various body parts, including the nose, if the skin is slightly oily. “Remove the oil and the object will not stick,” he explains.

The Indian government also said the claims that Covid-19 vaccines can make people magnetic are “baseless”.

AFP has debunked hundreds of false claims about the pandemic and coronavirus vaccines here.