With one of Ontario’s largest teachers’ unions currently in negotiations with the Ministry of Education over future contracts, several numbers have been floated online in reference to the average salary for a public school teachers in the central Canadian province. Some Twitter and Facebook posts claim the average annual salary for public school teachers in Ontario is 59,517 Canadian dollars (Can), but the number is closer to Can$90,000 according to the Ontario Ministry of Education, or Can$87,000 according to provincial teachers’ unions.

Social media users in Canada have been arguing about the average salary of public school teachers in the province of Ontario over the past week, using widely different numbers.

The debates was spurred by the ongoing contract negotiations between the province’s ministry of education and the Ontario Secondary School Teachers’ Federation (OSSTF), a union representing 60,000 teachers across the province. The union held a one day strike on Wednesday, December 4, the first such strike since 1997, to protest the provincial government’s position during talks.

After a journalist for the Toronto Sun asked on Twitter, “How teachers are oppressed when their average salary is about $90,000 a year plus benefits?” a Facebook page, which regularly opposes the government of premier Doug Ford, countered with a significantly lower figure. “Conservatives have been spreading this inaccurate number to justify cuts,” a Facebook post claimed, while suggesting that the average salary for public school teachers in Ontario is Can$59,517. The post featured a screenshot of this tweet. As a result of this fact-check, the post was deleted and North 99 shared this correction on December 6, 2019. 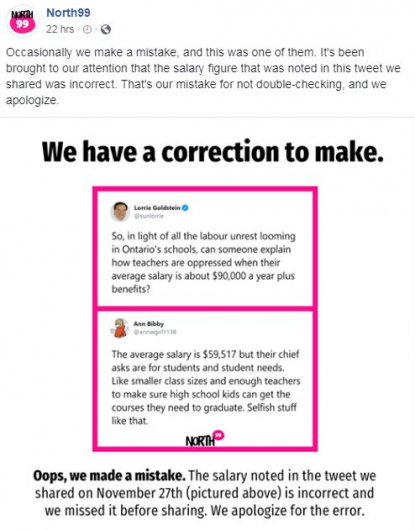 The figure suggested in the Tweet post appears to come from PayScale, a US-based online platform that provides job seekers and employers with average salaries in various industries to assist both parties in determining appropriate compensation during the hiring process. One page with similar numbers refers to the average salary for high school teachers in Toronto, Ontario.

However, because PayScale relies on crowd-sourced data to determine average salaries, the results are not always a statistically accurate reflection of reality. A PayScale spokesperson told AFP in an email that the company does not have sufficient data to reflect the reality of the average pay for teachers across Ontario.

For high school teachers in Toronto, Cad$59,517 is closer to the starting salary for a qualified teacher, according to the 2014-2019 collective agreement between the Toronto District School Board and the OSSTF.

Contacted by AFP, the Ontario Ministry of Education stated that the average provincially funded teacher salary was Cad$90,469 in 2018-2019, and Cad$92,913 for high school teachers. These numbers are based on the salary grids as reported by school boards for this year.

Sandra Zeni, another spokesperson for the ministry, reported to AFP that almost 70 percent of all public school teachers in Ontario had ten or more years of experience in 2018-2019, which explains the difference between the starting salary and the overall average.

Pierre Côté, general secretary for the OSSTF, said that the average salary for members of his union was Cad$87,000, a number based on union fee data. Côté added that due to the higher average age of OSSTF members, the numbers could be lower for members of Ontario’s other three large teacher federations, although “the salary grids are relatively similar overall.”

A representative for the Association des enseignantes et enseignants franco-ontariens (AEFO), another large teachers’ union in Ontario, told AFP that the average yearly salary for teachers in the province was Cad$87,940.

Despite online debates over wages in relation to the negotiations in Ontario, “The main stake in the talks (with the ministry) is class size,” Côté said. The Ontario government originally suggested increasing average class size from 22.5 to 28 students, before lowering it to 25, a number still considered too high by the OSSTF.

The union’s negotiators are also asking for a salary increase to match inflation, whereas the provincial government wants to keep it at one percent per year. A stall in the negotiations prompted the December 4 strike.